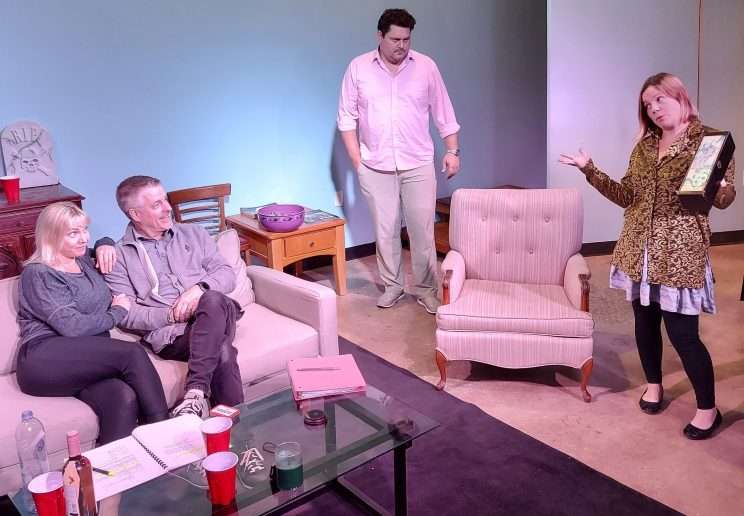 Activities in South Pinellas from September 15 to 22

Plant-Based Potluck They’re all about green — both money and lettuce — at Red Feather Studios in Gulfport this Saturday. Eat Be Grow, the nonprofit that planted and sustains the Gulfport Food Forest, is hosting a plant-based potluck with guest speaker Laura Oldainie. Oldanie is a Green Living Money coach who teaches people how to align their money with their values, like living green. Oldainie will discuss the cultivation of multiple forms of capital at this Saturday night club dinner. Red Feather Studios, 1301 49th St. S., Gulfport. 7 p.m. Suggested donation of $10. 727-560-0608. eatbegrow.com

Intercultural poetry Scottish poet and lyricist Robert Burns achieved literary fame in Scotland with the publication of his first book of poetry in the summer of 1786. Perhaps more interesting is the popularity of Burns’ class poems in Russia over a century later. He is the national poet of Scotland, but he is the people’s poet in Russia. Bill Parsons, Professor Emeritus at Eckerd College, discusses this cross-cultural poetic relationship at a joint meeting of the Scottish Cultural Society and the Russian American Club. Russian American Club, 2920 Beach Blvd. S., Gulfport. 3 p.m. $10. scstampabay.com

On the hill Ka’Tiki celebrates 40 years at Sunset Beach with all-day live music, retro drink prices, specialty food and more. BlessED and The Divine Derelicts bring reggae rock to the stage at 9 a.m. They are followed by Someday Honey, with their signature blend of blues, country and soul, at 1 p.m.; then pop/rock/country cover band Cat 5 at 7 p.m. Follow their event page on Facebook for more details as they are released. Ka’Tiki, 8803 West Gulf Blvd., Treasure Island. 9am-11pm www.katikisunsetbeach.com

Rock Me “Amadeus Live” is coming to St. Pete for one night only. Don’t miss your chance to watch the 1984 Oscar-winning film “Amadeus” with a live soundtrack provided by the Florida Orchestra. For fans of Wolfgang Amadeus Mozart, award-winning period dramas and biopics. Mahaffey Theater, 400 1st St. S., St. Petersburg. 7:30 p.m. $18-47. floridaorchestra.org

One day in Tampa Bay One day a year, One Day Tampa Bay sends photographers to neighborhoods to document life in Tampa Bay. Anyone who registers and pays the registration fee before 5 p.m. on September 16 can participate in this community photography project. Pro tip: They’re always on the lookout for good photos of Gulfport. The $30 entry fee supports the Morean Arts Center’s Photography and Digital Imaging program (with scholarships and equipment for youth and adults). moreanartscenter.org

Girls Calendar Still not sure what the coastal grandma trend is all about? Find out at the Gulfport Senior Center’s inaugural Calendar Girl fashion show. The show features styles for each month of the year using clothing provided by local boutiques and stores. But more than fashion, a ticket to the Gulfport Senior Center’s Calendar Girl Fashion Show includes appetizers, shopping opportunities and a chance to win door prizes. Money from ticket sales goes to the Senior Center building fund. Get tickets online, at Senior Center, BoTiki, Susan Mango or Zaiya. Catherine A. Hickman Theater, 5501 27th Ave. S., Gulfport. 2 p.m. $10. calendargirlfashion.eventbrite.com

Vino Veritas “In wine there is truth.” Trish Parry, Andrew Hughes, Larry Bukovey and Tracy Reynolds star in this dark comedy about the perils of honesty written by David MacGregor and directed by Stephen Ray. The play begins with two couples drinking wine together on Halloween night. But this is no ordinary wine. This ceremonial blue wine is made from the skin of blue tree frogs and acts as a truth serum. Grand Central Studio, 2260 1st Ave. S., St. Petersburg. Until October 9: Thursday, 7:30 p.m.; Fri-Sat, 8 p.m.; Sun., 3 p.m. $25-35. studiograndcentral.com

The Gabber team has brought back the print version of the newspaper and we’ve redesigned our website to make it easier for you to get the news. We’re not out of the woods yet, and every little bit helps pay for our reporters, printer, and other expenses. Support local news and families – donate now to keep The Gabber Newspaper serving the community it loves!