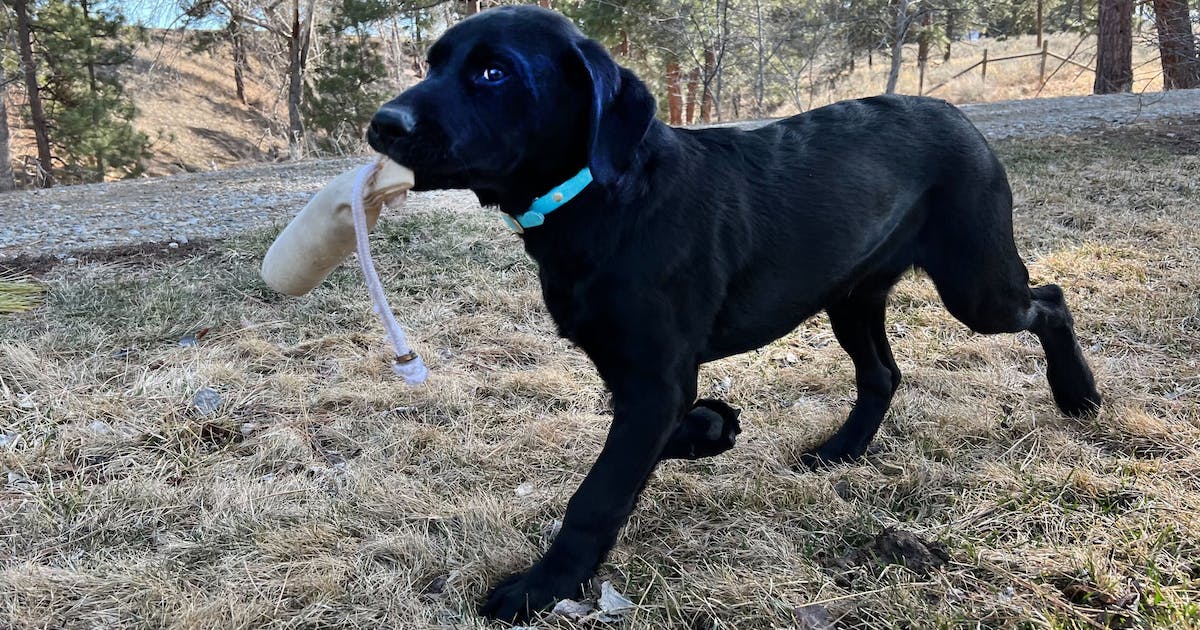 I had a friend whose last wish was that he wouldn’t die without a Labrador by his side. He didn’t mention his wife and kids, but maybe they made an honorable mention. Flying overnight from Miami to Buenos Aires on his annual duck hunts in Argentina, he would buy a first-class seat so his dog could sit beside him. So both were tight.

I was thinking about that other day walking a 4 month old black Labrador puppy in the early morning dim light. Two older Labradors were also with me, 2-year-old litter mates, one dark yellow and one light, Rowdy and Fella. But it was the pup that demanded my attention, cartwheeling as he did and pausing for horse poo when I wasn’t looking. ” No ! I was screaming and sometimes it worked.

An argument can be made, and my wife did, that I didn’t need another dog. Then again, nobody really needs kids either. But you throw your hat in the ring and before you know it, they’re the reason you get out of bed every morning, albeit earlier than you’d like.

Years ago, I needed a puppy fix while having breakfast at a truck stop in Atlanta. I had a Freightliner parked outside pulling a 45ft drop frame and was due to leave for Boston the next morning. An ad in the local leaf trumpeted golden retriever puppies for sale and soon I pulled up to a sprawling Cape Cod in a tony subdivision and pared a wad of greenbacks in exchange for a promising little tail. The burglary sometimes consisted of holding the little guy out of the window of the truck while I waited in line at the toll booths. I named the puppy Boogie because I loved his cry. You do the best you can.

Dad was a good retriever trainer who advised me a long time ago that a dog should never be touted unless he was dead or 2,000 miles away. Maybe he stole that from a professional trainer because that’s the kind of thing someone who hangs out with dogs all the time would say. Risky Business Ruby, a 1980 female black Labrador owned by Gary Thompson of Plymouth, was a 60-pound national champion retriever whose guts, brains and athleticism were unmatched. But sometimes, when she was slightly swerved on a long or blind mark, she simply continued, over hill and dale, believing for sure in the next county or the next, a bird could be found. “Start the pickup,” said his trainer. “Start the pickup.” And the hunt was on to bring her home for another attempt the next day.

Say what you will, but acquiring a puppy exposes the most dog-eared cynic’s vein of optimism. Horse trainers drawl that no one has ever committed suicide with a 2-year-old in the stable, thinking the youngster might be better than all the colts and fillies that came before him, a trophy on the fireplace.

So too, I thought, maybe, with this new pup, watching him chase shadows but imagining a future on the red carpet in which other dogs would give us standing ovations. OK, the chewing should stop, as well as the general digging and indifference to my comings and goings except at mealtimes or when he collapses at the end of the day, wanting, finally, to make a Hug.

King Buck was a multi-year National Champion who was part of a litter of eight born on April 3, 1948 in Storm Lake, Iowa. One of the last claimed puppies, Buck was sold for $50 and upon arrival at his new home in Omaha, he soon contracted distemper. Sick for months and weak, Buck nevertheless won an all-age entry at 2 and at 3 was sold to John Olin, the ammunition virtuoso of Winchester Olin.

Cotton Pershall was Olin’s trainer, and it was he who took possession of Buck after he won an open bet, paws down, in Winona. The selling price was $5,000, a princely sum in 1951.

Pershall wasn’t as high on Buck as OIin was. That changed a year later when Pershall took Buck to his first national retriever championship in Weldon Springs, Missouri. Nearly flawless in 10 rounds, Buck capped off his performance with a 225-yard water retrieval, a feat that captured the imagination of everyone who saw it. , not just about Buck’s endless ability to understand and please. But, potentially, to any dog.

In North Dakota when I was a kid, we had a big black lab named Boze. Like many hunting dogs at the time, Boze rode in the trunk.

One morning my dad, my older brother and I were duck hunting, and I was told to wait in dad’s car with Boze in the trunk while dad and my brother were setting decoys in a quagmire at the above a nearby hill.

But soon impatience got the better of me, and I hopped Boze off the trunk, tied him to my wrist with a leash, and led him up the ridge overlooking the quagmire. That’s when Boze saw a decoy fly out of dad’s hand and flew towards the fake duck with me in tow, writhing like a rag doll. When I touched the fetid water, I jumped on it briefly. But in no time I sank.

I was wondering the other morning if this new pup could ever pull off a stunt like that, or if instead, like King Buck, after meager beginnings, he could become a canine celebrity. So far he’s been pretty incorrigible, I understand. But he can “sit down” and “stay”, and on occasion he is not indifferent to me, not completely in any case.

So there is promise.

Mark Twain said that people are lucky because entering Heaven is by favor, adding that if it was by merit, we would all stay out while our dogs entered.

Somewhere in there is why my friend wanted a Labrador by his side when he died. He got his wish, and I hope I will too.