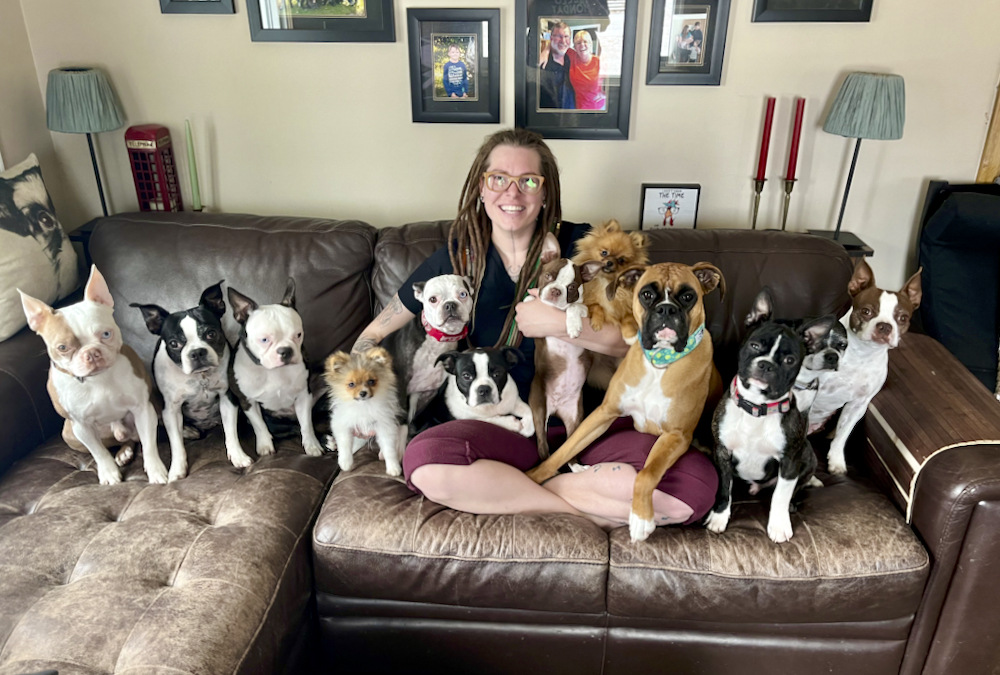 Backyard puppies, plants and chickens became hot trends when the pandemic took hold – but are they still popular for nearly two years?

â€œWhen the pandemic started, we were overwhelmed with people,â€ said Sharla Willis, who has operated a dog breeding business for 16 years with her mother Dorrie Nelson.

â€œWe didn’t have to advertise at all. We were getting at least two to five inquiries a day. It was crazy.”

But the phone no longer rings at her farm near Wetaskiwin, where she specializes in breeding Boston terriers and Boston terrier mixes.

There are a growing number of reports of “pandemic puppies” being taken to shelters as owners who are no longer confined to the home tire of their demanding new companions. However, Willis believes demand may have slowed down because everyone who wanted a puppy has now bought one while others have realized they don’t have time to care for a new dog. .

â€œIt may have slowed down a bit since the early stages of COVID-19,â€ said Colborne, founder and president of the Barrhead Animal Rescue Society (BARS).

â€œI think we’re seeing a pretty healthy market for dog adoption. Cats, not so much.

The rescue society helps animals in need, and sometimes they end up with animals that are not adoptable. But when a desirable dog is offered for adoption, offers pour in. A few weeks ago BARS announced a beautiful seven month old dog for adoption, and interest was high.

â€œWe ended up with 50 requests in 24 hours,â€ Colborne said, adding that before the pandemic, the same dog would likely have attracted half that number.

Willis is also in high demand.

â€œWe had three litters and they all sold out,â€ she said. â€œThe perfect humans have arrived – but it took a little longer than the start of the pandemic. “

Christie Pollack doesn’t think the popularity of growing plants has waned at all.

â€œThe plant craze is not going to go away,â€ said the owner of Christie’s Gardens and Greenhouses in High Prairie. â€œIt just changes. It is about the maturity of your gardener in his vegetal journey.

“Indoor plants are a kind of gateway to the flowers outside, which is the gateway to bedding plants, trees and shrubs.”

Pollack has operated her greenhouse in the winter, has been offering pop-up sales of plants, and has been selling online since 2015. She caters to everyone, but as a millennial, pays close attention to trends involving her generation and the next generation. Z (the oldest which are just entering adulthood).

Interest in growing plants and gardens has been spurred by the pandemic and the trend continues to strengthen, says greenhouse owner Christie Pollack.

â€œGen Z and Millennials love plants and are moving on to the next phase of this journey which is outdoor plants,â€ she said, adding that many of her clients have started by moving back to the house and taking care of office plants when the pandemic shut them down.

“I anticipate that they will be our customers and clients for the long term.”

She has seen a lot of new clients over the past 21 months. And a lot of long-time players are improving their game.

â€œThey want rarer things, they’re looking for the next piece of the puzzle,â€ Pollack said. â€œThey have their first factories and have had them for five years. Now they want to take the next step – spread, or something rarer. Or they want to know more about the bugs, or things like that.

Like most greenhouses, its sales have increased. But she had developed a three-year strategic plan and did not give up on it.

â€œWe bought a building in 2018 and we’re finally in that space, and we’re able to produce more, so we can sell more,â€ she said, adding that the increased demand has allowed her to â€œexpand. the business a little differently “.

For example, she now pre-sells plants, which helps her know what she needs to grow.

â€œWe can assess what will be popular with presales and then we can go back and develop more before the season,â€ she said.

In the first year of the pandemic, “everyone started eating chickens,” Cassandra Kirkpatrick said.

â€œThere were all of these concerns about food security – people kind of wanted to be more self-sufficient,â€ said the head of the urban hen and small herd program at Alberta Farm Animal Care.

Fewer people are creating backyard flocks, but those who are still interested want to improve their breeding skills, says Cassandra Kirkpatrick, who runs an urban chicken education program.

â€œA lot of people were more at home and had more time, so they were like, ‘OK, this might be a good thing for the family. “”

Fewer people signed up for the program this year, but those already involved were looking for knowledge, like how to overwinter a flock or treat birds that got sick.

However, some backed off once they realized how much work the birds involved. And the cost has gone up too.

â€œEven with my own flock over the past year, prices have continued to increase for feed, chips and the purchase of the birds themselves,â€ said Kirkpatrick, who lives on an area in southern. Alberta. â€œA lot of people have reduced their herds. I went from 120 birds to 40 because the math didn’t make senseâ€¦ if you look at it from a business perspective.

But she expects interest from Calgary to “increase” after city council changed its pet bylaw to allow more backyard herds.

Adopt, Don’t Buy, This Holiday Season, and Remember: Pets Are a Commitment