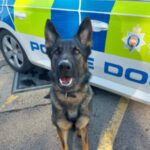 A police dog has tracked down a man suspected of robbing a shop in Brighton, Sussex Police have said.

The force said: ‘A theft suspect was found in a back garden thanks to the skills of a determined police dog.

“Police were called to a shop in Milner Road, Brighton at 11.45am on Sunday March 27 after a burglar alarm was activated.

“A store employee reported that the suspect attempted to steal items from inside the store before assaulting him behind the counter and snatching money from the till.

“The suspect then left the store.

“Officers who arrived at the scene received a report of the suspect from witnesses and from the victim, a 42-year-old man.

“They notified a dog officer who arrived with PD Hoxton, known as Hox, a two-year-old German Shepherd.”

The officer said: ‘Hox was asked to locate the suspect and, although the lead was potentially contaminated, he continued to follow.

“Two members of the public alerted us that they saw a suspect walking behind a property in Baden Road.

“Hox was already indicating to cross the road, so we crossed and looked behind the properties. Hox located a suspect in a backyard.

“All money stolen during the robbery has been recovered and the victim has also identified the suspect.”

Sussex Police added: “A 23-year-old man from Brighton has been arrested on suspicion of theft and taken into custody.

“He has since been released on bail by the police, pending further investigation.”