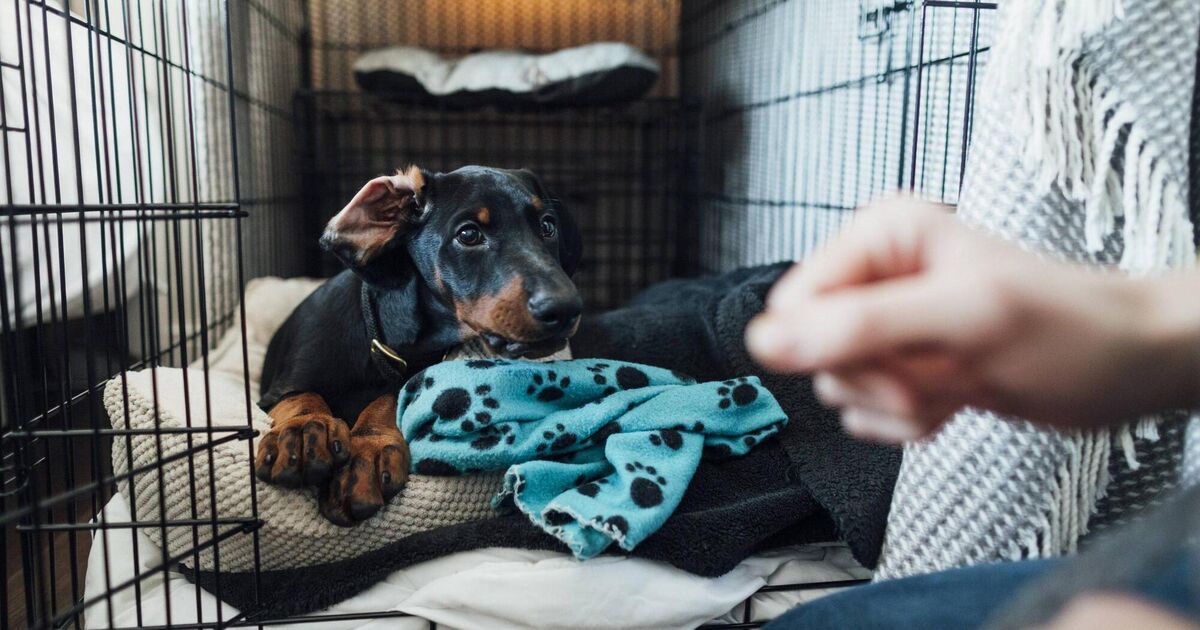 Crate training does not put your dog in the kennel

Most of us love having our own bedroom: a space we can retreat to, knowing we’ll be left in peace and can escape the hustle and bustle of the rest of the house. Dogs are no different from us: they like to have their own private spaces, where they can withdraw from contact with others when they feel a need for solitude.

Few Irish households are equipped to have a separate bedroom for each dog: there is enough pressure on housing for humans without including dogs in the equation. The good news is that there is a much simpler answer for dogs: the crate.

Dog crates are traditionally wire cages that can be packed flat, collapsing. They were originally designed as travel crates for dogs in transit. Crates can easily be set up in the corner of a room, lined with blankets, and made available to your canine friend.

My own Labrador cross, Finzi, has had the same crate since she was a young dog, and for her, it’s “home”. She often climbs inside for a nap. At night, when I say “it’s time for bed, Finzi”, she trots over to it, walks inside, then looks at me eagerly for the dental treatment that’s like brushing her teeth.

I close and close the cage door, and she’s happy in there until the next morning when I let her out, before breakfast. She has never, in her whole life, been unhappy in her cage. She never barks, moans, or howls: for her, it’s a place of peace, and she likes that.

Everyone in our house knows that when Finzi is in her crate, she should be left alone. No poking, no stroking, no belly rubbing. If people want to engage with her, the rule is that she be called out of her box first. She is always happy to go out, but that way she can decide for herself: if she wanted to stay in her cage, we would respect that, and we would leave her alone.

Besides creating a private space for the dog, crates have other benefits. They are an effective way to safely confine dogs. For example, Finzi has in the past been guilty of stealing food from kitchen counters, chasing our cats, and chewing on slippers that were left out. If we go out, leaving her free to roam the house, it’s a permanent risk. I know that if she’s in her cage, she can’t do any of these things: she’s in a safe zone, without temptation.

I’m a big fan of dog crates as a dog management tool, but they should be used with care, sensitivity, and wisdom. You can’t just put an animal in a cage, close the door, and then leave it alone. If you do, they may naturally react negatively, with fear and anxiety. And they will be emotionally damaged, so they will not want to return to the crate voluntarily in the future.

Instead, you should introduce a dog to its crate gradually, without pressure. Leave the cage door open at all times. Create a comfortable bed inside the crate and offer your dog some treat-filled chew toys. Sit next to them, outside the crate. Maybe you can read a book while they sleep. The idea is that they learn that it is a place of comfortable relaxation, not a place of restriction or punishment.

You may want to take other steps to help dogs feel comfortable.

Place a plug-in pheromone diffuser next to the crate: this produces odorless vapors that are artificial analogues of the natural soothing chemicals female dogs produce when raising puppies. Adult dogs are calmed and settled when these pheromones float through the air around them, and diffusers are a useful tool to help anxious dogs feel less stressed at all times.

Install a radio or loudspeaker next to the crate, play calm music: dogs are said to prefer classical, soft rock or reggae. Avoid heavy metals!

It also makes sense to begin crate training at a time when your dog is naturally tired, such as after a long walk or busy playtime.

After a few weeks of daily lounging at the checkout with an open door, you can start closing the door. Pick a time when your dog sleeps and don’t leave it closed for a while. Then you can start leaving the room again, gradually increasing the amount of time your dog is alone.

Eventually, most dogs will adapt like Finzi, seeing the crate as their natural den, a place to enjoy. And when the door is closed, they don’t see it as a big, bad, negative event. Instead, they view it in a way similar to how they view the weather: the door happens to be closed, just as it could be raining or it could be windy.

Many new owners (or pet parents, to use that contemporary term) don’t like the idea of ​​crates: the idea of ​​putting their fur baby in a bare metal crate seems wrong. Usually good experiences with dog crates are enough to help people overcome this misconception.

An alternative and innovative approach has recently been launched in the United States: a dog room which is in fact a crate with attractive and soft walls and floor. It can be tricky: many dogs like to chew on anything soft. Again, dogs need to be trained to get used to their surroundings before they are left on their own.

Does your dog have his own private room? If not, consider getting them a crate.

A new look at Have a Heart | Way of life