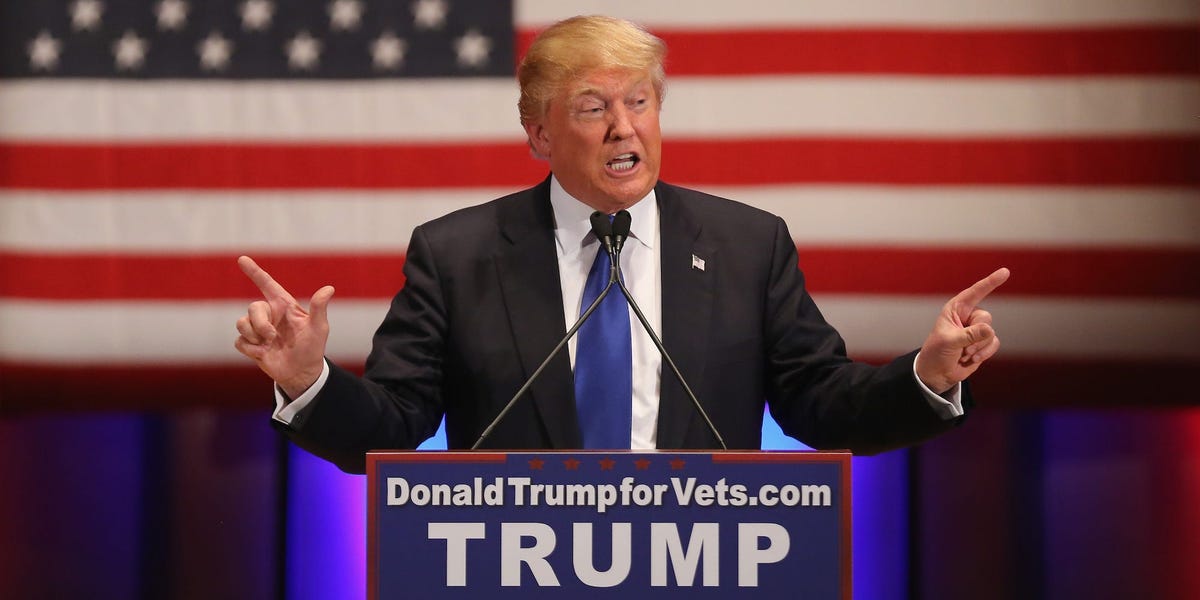 The Federal Election Commission is letting former President Donald Trump off the hook even after the body’s legal counsel says he violated federal campaign finance laws with a fundraiser for veterans of Iowa in 2016, according to documents released this week.

At issue was whether Trump violated laws prohibiting “soft money” spending — using unregulated, non-campaign funds for political purposes — during his 2016 presidential campaign. Specifically, Trump funneled about half of the $5.8 million he raised at the Des Moines veterans event on Jan. 28, 2016, to his now-defunct Donald J. Trump Foundation. The Trump campaign then led how the foundation, a separate entity, spent $2.8 million on charitable funds just ahead of the Republican caucuses in Iowa.

Last month, the FEC voted along partisan lines to dismiss the case. The Campaign Legal Center, an ethics and government watchdog, criticized the commission in a statement to Insider.

“The FEC’s failure to enforce campaign finance laws is nothing new, but the latest standoff could be a new low,” said Erin Chlopak, senior director of campaign finance at the Campaign Legal Center. . “The Commission’s nonpartisan career attorneys have found reason to believe that the Foundation has been used illegally to benefit Trump’s presidential campaign. The Republican commissioners voted not to pursue the case. It’s time for the FEC do their job.”

“This is one of a long series of cases we’ve had where our nonpartisan professional staff have recommended moving forward in some way against a complaint involving the former president,” Weintraub told Insider in an interview Thursday. “And each time, the Republican commissioners find an excuse not to move forward.”

Weintraub suggested that Trump could have faced a “pretty hefty fine” if the commission had moved forward, given that he was charged with a multimillion-dollar violation of campaign finance laws.

“I think that would have been a strong message to send, to discourage this kind of activity by others,” she said. “But unfortunately we couldn’t do it, we didn’t have the political will to go ahead. I mean, some of us did.”

Republican commissioners Sean Cooksey, Allen Dickerson and Trey Trainor have yet to issue a statement on the matter, and none have responded to Insider’s requests for comment.

In June 2018, New York Attorney General Barbara Underwood passed evidence of Trump’s possible violations to the FEC, writing in a letter that her office had “acquired substantial credible evidence” that Trump had broken the law.

In a complaint to the FEC the following month, the Campaign Legal Center accused the Trump campaign of violating campaign finance law for soliciting and then using its foundation’s share of veterans’ donations for policies based on the evidence uncovered by the NY AG investigation.

Emails and other documents uncovered by the New York Attorney General’s investigation revealed that Trump campaign manager Corey Lewandowski gave then-Trump Foundation treasurer Allen Weisselberg a list. veterans’ organizations in Iowa that the Trump campaign intended to target in order to drum up political support in the state ahead of the Feb. 1, 2016, caucuses.

Weisselberg is also the Trump Organization’s chief financial officer and is currently embroiled in separate investigations by the New York Attorney General and the Manhattan District Attorney.

Trump then handed out 6-figure donations at several events in the days leading up to the caucuses, each giving enlarged checks of $100,000 to Partners for Patriots, Support Siouxland Soldiers, Mulberry Street Veterans Shelter and Puppy Jake – all of whom were charities based in Iowa. He ultimately lost the caucus to Republican Senator Ted Cruz of Texas.

In response to Campaign Legal’s complaint, the Trump campaign said veterans’ contributions were only temporarily in the foundation’s coffers, though documents uncovered by the New York attorney general’s investigation show contributions. extending to May 2016. The campaign also argued that it was merely fulfilling its legal obligations to donors by directing the charity’s spending and accused the watchdog group of trying to “defame fundraising for charity”.

“Essentially, anything a federal candidate does can have an effect on that candidate’s public image, and philanthropic activity is certainly no different,” Trump campaign attorney E. Stewart Crosland wrote. in a letter to the commission in September 2019. “Whether these efforts result in some goodwill with the public is simply not a campaign finance (or CEF) concern.”

Just three months later — under pressure from a lawsuit filed by the New York Attorney General’s office targeting both veterans-related political contributions as well as other cases of possible fraud — Trump dissolved the foundation. , later admitting the facts of the case. under the regulations.

In May 2019, the FEC’s legal counsel then recommended that the commission vote to investigate Trump for violating federal campaign finance laws. They reaffirmed that position in March 2020 after the campaign accepted the facts of the case as part of a separate settlement with New York State.

But there was a major problem: The Federal Election Commission had lost its quorum at the end of August 2019 when the composition of the body of six commissioners atrophied to just three, preventing the commission from making decisions. on current affairs. The FEC remained mostly without a quorum until December 2020, when the Senate confirmed three new appointments.

When the commission finally voted on the issue in January 2021, it found itself in a partisan stalemate over whether to pursue the case. Each Republican commissioner voted to reject the allegations entirely, while the two Democrats and a left-leaning independent voted to open an investigation.

It was in their first executive session after quorum was restored that the Republican commissioners voted not to investigate the allegations against Trump.

According to Broussard and Weintraub, the Republican commissioners cited the fact that the statute of limitations was to expire within six months in voting not to pursue the case. In the absence of a quorum, the FEC accumulated a backlog of cases, some of which were no longer enforceable. But Weintraub told Insider she doesn’t buy the Republicans’ argument.

“We had a lot of cases where we had to choose whether to go ahead or not, given the statute of limitations,” she said. “But we made progress on a number of them, but not on those involving a respondent named Trump.”

Indeed, the commission’s legal adviser found reason to believe in 2019 that several GOP figures, including Trump, had violated the “foreign nationals” ban by employing the now-defunct British firm Cambridge Analytica, but the statute of limitations has expired and Republicans have blocked further action.

Both in his interview with Insider and in his explanatory memorandum, Weintraub said the New York Attorney General’s discovery had already done much of the investigative work for the commission, raising further questions about why. where six months was not enough to enforce the law.

“We didn’t have to do much because the attorney general handed it to us, all these incriminating facts,” she said.

Carhartt is offering up to 50% off winter clothing