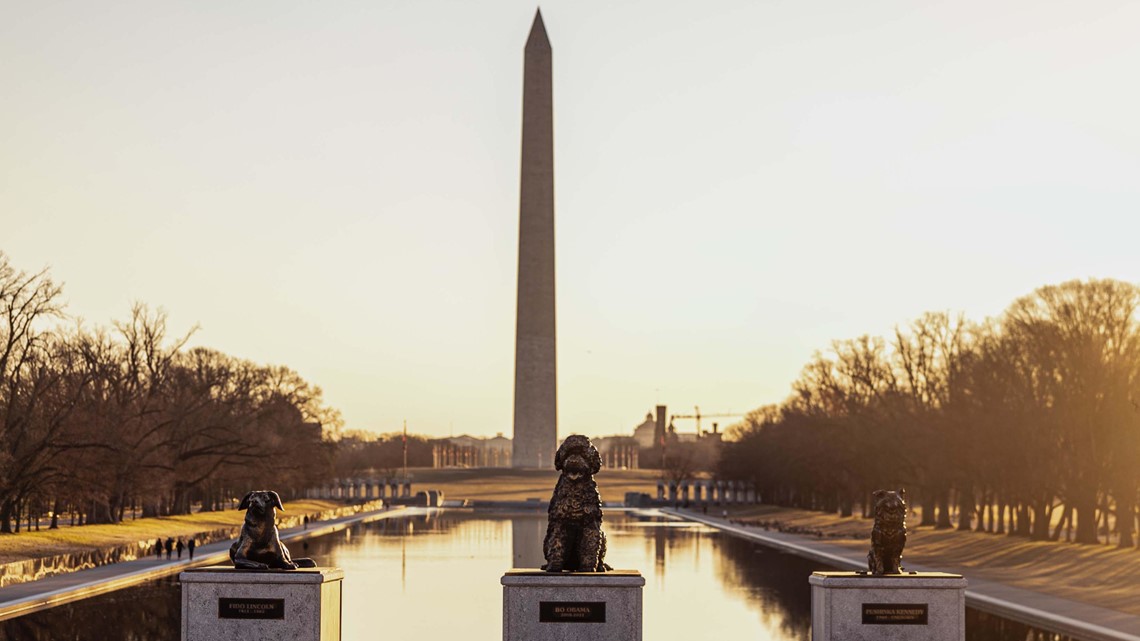 Clean Label dog nutrition brand Jinx has unveiled the first puppy statues, which will be displayed over the holidays and then moved to a permanent home.

WASHINGTON — We all hear about the leaders in the Oval Office every time Presidents Day rolls around, but what about the first furry four-legged companions behind the head of state?

This year, the first pups are getting the same all-star treatment thanks to Clean Label dog nutrition brand Jinx, which unveiled three statues of the famous dogs behind a few past presidents.

“Join us (with your puppies) as we give America’s four-legged leaders a place in history, right in the middle of our nation’s capital,” the company said on its websitecelebrating their installation.

“Over the past couple of years we’ve come to realize how much we depend on our pets for emotional support. At Jinx, we all look to our dogs to get through tough days and thought if this was true for us, imagine the pressure of being the President of the United States,” co-founder Sameer Mehta said via a press release.

“That’s why on this Presidents Day, we put politics aside to celebrate our Chief Companions, the dogs who have been there for some of our nation’s greatest leaders, ready and waiting for the belly rubs and the daily walks.”

The company celebrated the three doggies on their websitewith a map of their locations and descriptions of each pup and their life with the President.

“Fido was a beloved, sensitive, and nervous pup. When Lincoln won the presidency, his popularity increased, and Fido was often met with party sounds and increased traffic of people and foot traffic. These sounds and news routines frightened Fido so much that Lincoln and his wife Mary left Fido at home because they thought life in Washington would be too difficult for him.

“Pushinka [Kennedy] was a gift sent to his daughter Caroline by the Soviet Premier and was the daughter of Strelka, the first dog sent into space by the Russians (August 1960).”

The company also shared some fun facts about one of the White House’s most recent occupants, Bo Obama. “Promised as a gift to Obama’s daughters, Malia and Sasha, if he wins the presidency. In 2008, Bo’s first photo went viral on social media and he quickly became the object of national fascination. It eventually became so popular that it was the subject of four books, made into a plush toy sold on the White House’s online gift shop, and had an official calendar.”

The three dog depictions can be spotted right in front of the Lincoln Memorial, with a clear view of the Washington Monument in the background. They were installed at 7 a.m. and will be on display until the evening hours of the holidays.

We just live in it.

WUSA9 is now enabled Roku and Amazon Fire TVs. Download the apps today for live newscasts and video on demand.

Download the WUSA9 app to get the latest news, weather and important stories at your fingertips.