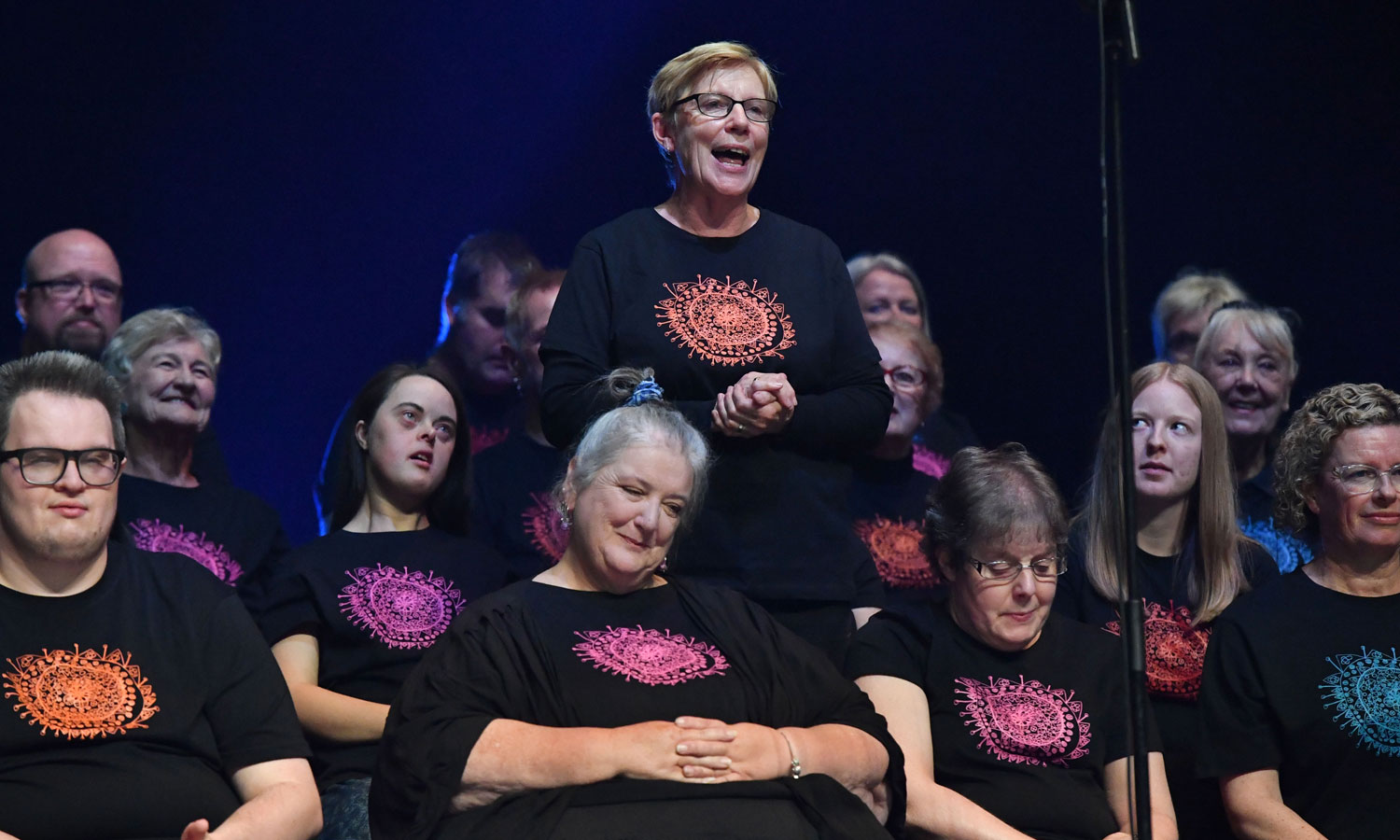 A respected artistic director who has worked with people from diverse backgrounds for over 30 years, Rix founded Tutti in South Africa in 1997 as a small singing group for people with intellectual disabilities in Adelaide. It has since grown into a multi-arts organization that holds programs for approximately 200 attendees each week.

Rix retired last September, handing over the reins of Tutti to theater designer and collaborator Gaelle Mellis, and received the Premier’s Lifetime Achievement Award at the 2021 Ruby Awards. She was one of eight 2022 Australian Council Prize winners announced this week, receiving the Ros Bower Prize for Community Arts and Cultural Development.

In a video produced by the Australia Council, she says she has always been motivated to do something to fight injustice, inequality, injustice and oppression: “By working with other people and by making art, something wonderful happens and people forget their difference. Inequalities disappear because people work so closely together and support each other.

Rix is ​​the only South Australian among recent Australia Council Award recipients, who also include author Robert Dessaix and jazz musician and songwriter Judy Bailey. See the complete list here.

Want uninterrupted time and space to write in a peaceful, scenic location? South Australian writers working in any genre or form are invited to apply for two Writers SA Residence Fellowships at Varuna, the National Writers’ House in the Blue Mountains in New South Wales.

One of the fellowships is for a First Nations writer, while the other is for an emerging writer who has not yet published more than two full manuscripts or collections (applicants for both must be members of Writers HER). Each residency lasts seven nights, with the fellowship including full board, time to write in a private studio, a travel grant, and manuscript consultation with a professional writing mentor.

Applications (here) are open until September 5, and residencies will take place between January and August 2023.

April Beak, who will play Elle in Legally Blonde: The Musical, with Obie the chihuahua. Photo: University of Adelaide

Two canine actors are wanted for an upcoming University of Adelaide production Legally blonde: the musical.

The show – based on the film starring Reese Witherspoon as sorority girl Elle, who enrolls at Harvard in an attempt to win back her ex-boyfriend and ends up becoming a successful lawyer – will be presented at the Scott Theater at the university from September 29 to October 2. It is directed and choreographed by Nikki Snelson, who had a role in the original Broadway production of Legally Blonde: The Musical.

Auditions will be held August 21 on the North Terrace campus for Bruiser, Elle’s chihuahua, and Rufus, the bulldog owned by her manicurist friend Paulette. Potential stars must have a “laid back disposition” and be responsive to commands, with Bruiser also having to spend a lot of time being carried around in a handbag. Along with five minutes of fame, there are other perks, including free tickets for family and friends.

More details can be found here, where your furry friend can also register for an audition spot.

Meet the artists of the ACE studio

Members of the public are invited to visit ACE’s upstairs studios at the Lion Arts Center from 12 p.m. to 5 p.m. on August 13 to meet artists from its current studio program in their workspaces.

Visitors will also get a glimpse of the work that the five artists – Ash Tower, Chelsea Farquhar, Cecilia Tizard, Dani Reynolds and Shaye Dương – are creating for the ACE exhibition Studios: 2022 Later this year.

The Open Studios event (details and registration here) is part of SALA, with free admission and refreshments available. It will include the launch of Allison Chhorn’s Skin Tone Night Day artist’s book, produced in collaboration with designer Tyrone Ormbsy to accompany his exhibition of the same name which was reviewed here on Review last month. ⁠

“They give you a satellite phone and a snakebite kit”

Country Arts SA has announced that contemporary Victorian artist Ben Sibley (Photo) will be the 2022 Artist-in-Residence at Grindell’s Hut in the Vulkathunha-Gammon Ranges National Park in the northern Flinders Ranges.

The three-week residency is open to artists nationwide working in any discipline and allows the successful applicant to pursue their practice while immersed in a beautiful upcountry environment with historical significance.

Sibley, a workshop facilitator at the Victorian College of the Arts and a full-time practicing artist, will be visiting the cabin in October. It aims to produce a series of large-scale works that map elements of the landscape, including plants, geological formations and specific sites.

“I’m super excited about the residency,” he says. “I’m wary of the remote nature of Grindell’s Hut – they give you a satellite phone and snakebite kit before you leave! But I anticipate being completely immersed in such incredible scenery for an extended period of time will be great for my conceptual development and my artistic productivity.

The Adelaide Symphony Orchestra has announced a Mid-North regional tour which will include a series of community and family performances leading up to a major concert – Postcards– at Peterborough City Hall on Oct. 8.

Presenter Guy Noble will direct Postcardswhich he says will feature popular classics that will take audiences on a journey through orchestral music associated with particular parts of the world.

“It’s more relaxed outside of Adelaide,” he adds. “Smaller venues mean the audience is closer to the musicians, and that’s the real thrill of hearing the orchestra live – feeling the vibes of the music up close. I think audiences in the regions are really enthusiastic – it’s not every day that the Adelaide Symphony Orchestra comes to town, so there’s a sense of occasion.

The family and community concerts will be presented in Bundaleer Forest, Clare and Peterborough between October 5 and 8, with full details on the ASO website.

Green Room is a regular column for InReview, providing fast-paced news for those interested or involved in South Australian arts and culture.

Contact us by writing to us at e[email protected]

Your support will help us continue the important work of InReview in publishing free professional journalism that celebrates, questions and amplifies the arts and culture in South Australia.