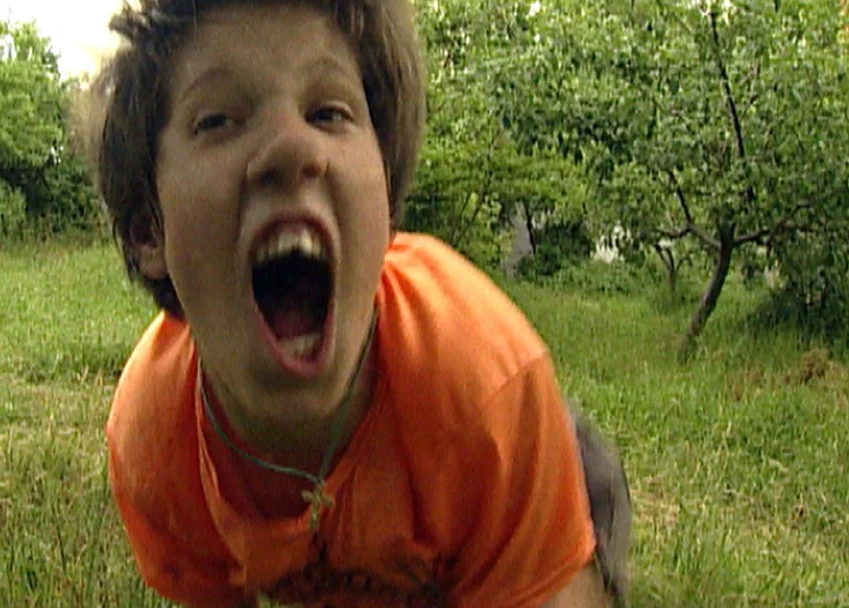 WHEN seven-year-old Oxana was discovered living in a kennel, authorities were horrified by the appalling conditions her alcoholic parents had left her in.

But when the young girl crawled out of the enclosure on all fours and could only speak through barking, it was unlike anything they had ever seen before.

At the age of three, in Kherson, Ukraine, Oxana Malaya was left outside in the cold by her abusive mother and father.

In a desperate attempt to warm up, she crawled into a kennel with their pet dog Naida – a pen she would live in for the next five years.

Naida and the other wanderers in the neighborhood treated Oxana as their own – sharing their food with her and even protecting her from the police who discovered her.

By the time she was rescued she had already lost the ability to speak, was running on all fours, panting and barking like a dog.

She ate off the floor, lacked basic human skills, and even cleaned herself the same way as her canine friends.

The abuse case presented experts with the unique opportunity to study Oxana as part of the nature-nurture debate – as she had been thought to be a normal, healthy child before she was abandoned.

Although she was placed in foster care and learned to walk and hold a conversation, she retained some of her canine behaviors.

She hid objects much like a dog and doctors said it was unlikely she would ever be fully rehabilitated.

Even as an adult, experts determined she had the mental capacity of a six-year-old.

Her case has been compared to that of Genie Wiley, a 13-year-old girl who had been locked away from the outside for most of her life by her abusive parents.

Although Genie was not raised by animals, she suffered from the same social deprivation as Oxana and could not speak or walk.

She was locked in her bedroom from the age of two and tied up in a handmade straitjacket and tied to a chair because her father thought she was disabled.

At night, she was locked in her crib and given only a liquid diet, leaving her severely malnourished.

After he was rescued in 1970, it gave experts the chance to study critical learning periods for children as they tried to teach Genie new language skills.

PART OF THE PACK

On November 4, 1983, a young girl was born in a poor family in the village of Nova Blagovishchenka, Ukraine.

Doctors say the child was ‘normal’ at birth despite having alcoholic parents, but went untreated throughout his early years and was forgotten, according to reports.

One night, when she was only three years old, she ventured outside before being kicked out by her cruel parents.

The young girl snuggled up to her pet dog Naida for warmth before slowly being accepted into the pack with other neighborhood dogs.

It is believed she shared all the food the dogs received and may have ventured into the house for scraps before being kicked out by her cruel father.

She learned every part of their canine behavior, barking, growling and even licking her clean skin.

Oxana speaking as part of a 60 minute documentary, said: “Mom had too many kids, we didn’t have enough beds. So I crawled over to the dog and started living with her.

“I was talking to them, they were barking and I was repeating it. It was our means of communication.”

The director of the institute where Oxana was taken told 60 Minutes: “She looked more like a little dog than a human child.

Shocking video footage also showed a young Oxana running on all fours, barking and drinking water from the tap in the same way as a dog.

It wasn’t until Oxana barked at a neighbor that it aroused suspicion and the woman called the Ukrainian authorities.

They arrived home to find a gruesome scene – a young girl crawling and being protected by a pack of dogs.

The animals were so protective of young Oxana that they would not allow the police near and had to be chased away with food.

She didn’t understand the officers and could only communicate through barking and growling – she was a completely wild child.

She also hid objects given to her and hid them – much like a dog with a bone and attacked and bit when scared, according to reports.

Oxana was taken to a children’s home where she was taught “how to be human” by stunned staff.

She learned to walk upright, communicate and eat properly for the first time.

Now 38, she lives as an adult in a special care home that cares for animals and is able to speak and communicate some emotions.

One of the care home workers said: ‘I remember when she was first brought here. She wasn’t like a human being, she was like a little animal.

“About six months later, she had completely changed.”

However, Oxana said she still has time to feel lonely and get back to her canine ways.

She said: “When I feel lonely, I find myself doing everything I crawl on all fours. This is how I feel alone.

“Because I don’t have anyone, I spend my time with dogs, I go for walks and I do whatever I want. Nobody notices that I’m crawling.

She was studied closely by child psychologists and experts and underwent a series of cognitive tests.

They believe she will never be able to catch up on the learning she missed out on during the crucial years of her development.

In the shocking 60 Minutes documentary, Oxana decides she would like to meet her mother and father who abused her as a child.

She said, “I want to see them with my own eyes so desperately because I’ve been told I don’t have parents, but in fact I do.”

The team was unable to find her mother but were able to arrange a tense reunion with her father.

In the clip, the two remain silent before Oxana reaches out for a hug and is introduced to her stepsister.

Oxana is unfortunately not the only case of a feral child in the world.

In one of the best-known cases of children discovered living in the wild, two young girls were found in the Indian jungle in the 1920s.

Rescued from a wolf den at the ages of three and eight, the children lived with a wolf and her protective pack.

It was never clear if the two were related or exactly how they ended up there.

They were later rescued and taken to an orphanage by Reverend JAL Singh, who tried to help them adjust to human life, starting with naming them Kamala and Amala.

But the couple unfortunately struggled to adapt to society after their amazing start to life and reportedly continued to display “wolfish behavior” – such as crawling, being mostly nocturnal and biting people.

The extraordinary case of Marina Chapman dates back to 1954 when she was kidnapped at just five years old from a remote South American village and then abandoned in the jungle.

She claims she was snatched from her garden in Colombia and thrown into a rainforest – when a family of capuchin monkeys later took her under their wing.

Marina, now 70, says she slept in a hollow tree, lived on berries, roots and bananas, and crawled like her peers for five years.

United Way of the Mohawk Valley Welcomes New Board Members