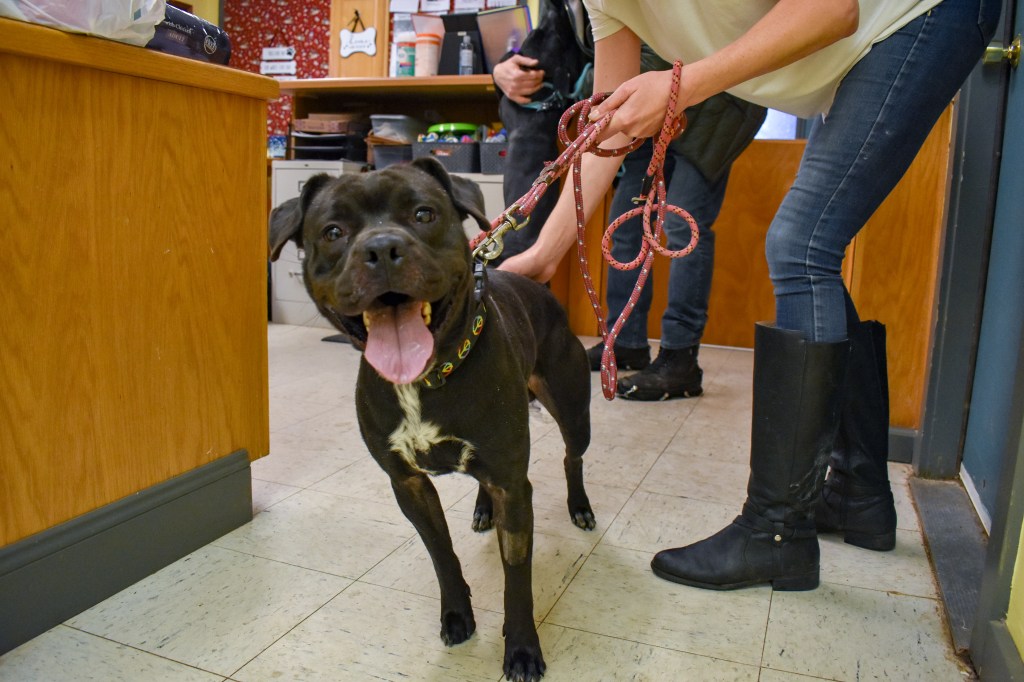 The project began around May 2021 with the first three dogs beginning their training with the incarcerated people. The training lasts 10 weeks and is designed to make dogs wiser and able to follow certain commands.

Officially known as the Veterans Canine Training Program (VCTP), the program is part of the Midstate Correctional Facility Veterans Residential Therapeutic Program. A representative of the program says its goal is to provide incarcerated people with social skills and improve their job skills for successful reintegration into the community.

“Dogs receive quality care, training and socialization and are trained to AKC Canine Good Citizen standards,” the rep said. “The ultimate goal of the program is for the dog to be adopted into a forever home.”

“We trained inmates to train dogs,” said Wanderers’ Rest Board Chairman Lewis Carinci. “The dogs stay there with the inmates in the cells.”

On its website, the New York State Department of Corrections and Community Supervision indicates that the state’s canine training program (which includes others throughout the state that are not necessarily focused on veterans) also gives eligible incarcerated individuals the opportunity “to achieve a sense of satisfaction and self-worth—providing foster care and basic obedience training for protected dogs is worth it.

The program is a win-win for everyone involved, says Carinci.

“It uplifts everyone,” Carinci said. “Talking to the guards, they actually said they see a big difference in the inmates.”

The Mid-State rep added that for trainers, the program boosts morale, provides structure and builds accountability.

Any incarcerated veteran interested in Mid-State is welcome to apply to participate in the canine program. The prospective trainer must reside in the Veterans Housing Unit and be an active participant in the Veterans Program. Applicants go through a screening process once they apply and are interviewed by the Veterans Canine Training Program committee.

Carinci said many of those chosen to train also have PTSD, making screening important to ensure they can handle the situation.

“My biggest fear was [that] at the end of the program the dog is taken away and I didn’t want it to bother them. What we’ve found is that they’re totally on board with it. They understand they are doing the dog a good service,” he said.

So far, six dogs have graduated from the training program, each receiving a small plaque of recognition, Carinci said. The first training cycle included three puppies, the second – three older dogs. The third round that has just begun includes three new puppies, Johnny, Oliver and Felicity, who arrived at the facility on January 19.

Carinci said the dogs came out of the program extremely well behaved.

“No food aggression,” he said. “You can tell them to sit down, [then] raise your hand, and they will sit still and not move until you give them the ok. They don’t jump on people. It’s so good for dogs.

Carinci said often the guards at the facility are the ones who end up adopting the dogs when they graduate.

To ensure the training is properly reinforced after the program is completed, owners may have the option of being briefed on their own by qualified individuals outside of the facility, he said.

Forming a training program with incarcerated people is something Carinci had been trying to pursue through Wanderers’ Rest for some time. He said that during his time as Madison County Supervisor, he tried to get something done at the Madison County Jail.

“It really wouldn’t have been a good choice because the inmates aren’t there long enough,” he explained.

The alliance with Mid-State began when the correctional facility was looking for a program partner and found Wanderers’ Rest a good fit. When they asked the shelter if they wanted to go ahead, Carinci replied, “Absolutely. Arrangements were made before COVID, but training could not start until much later due to the pandemic.

This is the first canine program at Mid-State.

“Everyone in this prison, they just can’t wait,” Carinci said of the days when new interns are dropped off. “It’s so funny, when we drive to the jail to bring the dogs, everyone is looking out the windows.”