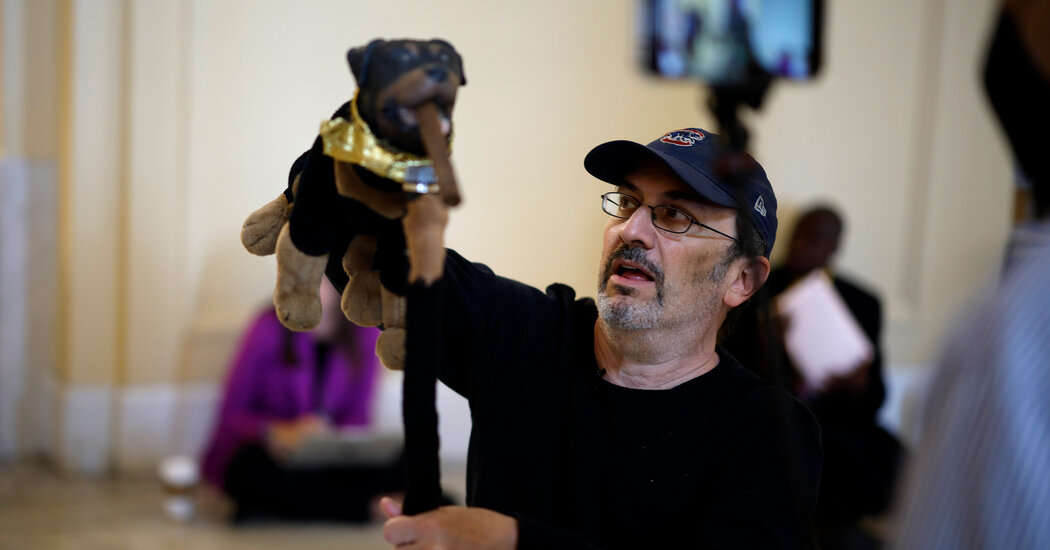 ‘Late Show’ staffers arrested at US Capitol during filming

United States Capitol Police have arrested members of the CBS show “The Late Show With Stephen Colbert” who were filming a segment featuring a salty canine puppet voiced by comedian Robert Smigel.

Capitol police said Friday they arrested seven people in a hallway of the Capitol building on Thursday night, when the building was closed to visitors. The people had been ordered to leave the building earlier in the day, police said.

CBS said Triumph the Insult Comic Dog, the puppet Mr. Smigel has voiced for years, was at the Capitol on Thursday with a production crew when they were arrested by police. At the time of the arrest, the crew had completed pre-arranged interviews with members of Congress and were filming the “final comedy bits” in the hallways of the building for an upcoming segment on “The Late Show.”

The seven people were later charged with unlawful entry, and an investigation is underway in consultation with Matthew M. Graves, U.S. Attorney for the District of Columbia, Capitol Police said, adding that further criminal charges could be filed. Mr. Graves’ office could not immediately be reached for comment on Friday evening.

The arrests at the Longworth House office building came at a time when Congress is holding televised hearings into the January 6, 2021 attack on the same building, in which supporters of President Donald J. Trump violently stormed the Capitol complex.

News of the arrests was sure to provide fodder for pundits, comedians and politicians.

Shortly after the arrests were announced on Friday night, Fox News host Tucker Carlson told viewers that Mr. Colbert’s producers had just “committed an insurrection” at the United States Capitol. “It’s exactly like what happened on January 6, so we will be looking closely at the sanctions,” he said. said.

“Liz Cheney, call your office,” Carlson added, referring to the Republican congresswoman from Wyoming and the vice chair of the committee investigating last year’s attack. “We have another committee to form.”

Mr. Smigel, the comedian who plays Triumph the Insult Comic Dog, could not be reached for comment on Friday night. CBS declined to provide further information about the arrests, or when the segment featuring Mr. Smigel’s canine puppet would air.

Mr. Smigel is a former writer of “Saturday Night Live” and “Late Night with Conan O’Brien,” and his puppet is an irreverent, cigar-biting dog who sometimes wanders the halls of American power. Days after the 2016 presidential election, Mr. Colbert introduced Triumph on his show as “an old friend and campaign veteran, a real corporate mandarin and a toy Rottweiler”.

In a 2016 special election earlier that year, Triumph had described himself as an “insulting comic”.

“It’s the wave of the future,” he told Republican presidential candidate Mike Huckabee. “That’s what Trump does.”

In a February 2020 segment of Mr. Colbert’s “Late Show,” Triumph visited the United States Capitol and joined a scrum of reporters around Senator Mitt Romney, Republican of Utah.

“Hey, Mitt! ” he said. “I am a canine journalist! Can I be escorted to your roof? (Mr. Romney did not respond.)

Later, when Triumph attempted to enter a secure area of ​​the Capitol building, a security guard told him he had no access.

“I am here to report on the very significant loss of time that is occurring in the hemicycle,” he replied.

These 4 metrics show that Autodesk (NASDAQ:ADSK) is using debt safely