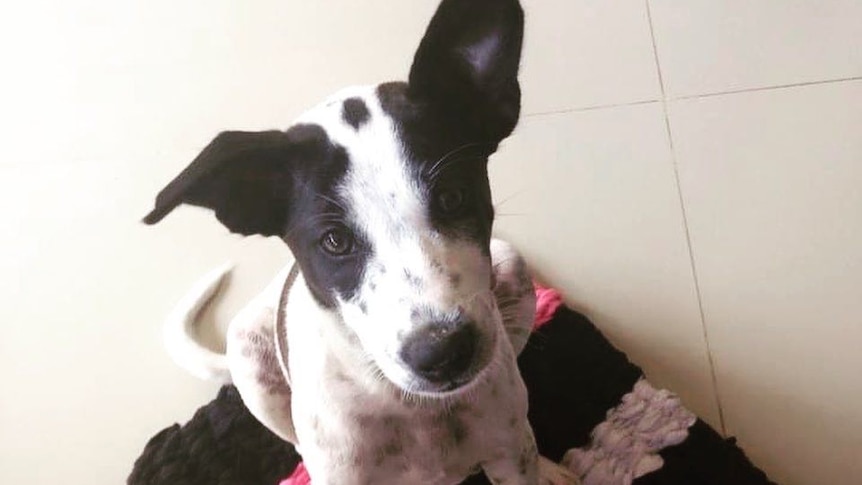 Meet Munchkin. He’s a very expensive Bali street dog as his owner charters a private jet to take him to Australia

A Sunshine Coast woman goes to extraordinary lengths to locate her pet dog – a former Bali street dog – ordering a private jet to take her from New Zealand.

Natasha Corbin has spent the past six years trying to get Munchkin to Australia after falling in love with her while living in Bali with her fiance David Daynes.

The couple lived in Bali while Ms Corbin ran an online marketing business and was able to work remotely.

â€œWhen we decided to move to Bali, my partner had a rule for me because I’m a dog lover and that was that I wasn’t allowed to interact with a dog,â€ Ms. Corbin said.

“I just ignored all the dogs the best I could and this dog, Munchkin, she was just a tiny little puppy, followed us around because she somehow came from meet up near our villa. “

Munchkin’s trip to Australia has seen many twists and turns since Ms Corbin first saw her as a puppy six years ago.

â€œThe reason we were in New Zealand was because we had to live there for a while for our dog to be allowed to come to Australia,â€ Ms. Corbin said.

She said international restrictions on pet quarantine made it easier to bring a dog to Australia from New Zealand rather than Indonesia, so the couple moved there two years ago .

But Ms Corbin has been separated from Munchkin and Mr Daynes for the past five months after returning to Australia for surgery on the Gold Coast.

Now she’s taking drastic action by leasing a private jet and trying to sell seats to human passengers to offset some of the costs.

“I just want them at home and I want to take the option that is most likely to work and if that means we have to pay extra and try to sell them [private jet] seats and do all that extra work, I’m ready to do it, â€she said.

However, a jet doesn’t come cheap, with a price tag of $ 40,000 to $ 45,000, so Ms. Corbin reached out to the Sunshine Coast community to find human travelers who also want a seat on the plane.

â€œI was inundated with people sharing their stories of how they were stranded and their flights were repeatedly canceled,â€ she said.

“They are just desperate to be reunited with their families for Christmas.”

Having failed to rehouse the puppy on several occasions in Bali, Ms Corbin decided to bring him home to Australia, but she failed to realize the obstacles she had to go through.

â€œWe were told the process would take around six to eight weeks and cost us around $ 10,000, but it’s now been almost six years of trying,â€ Ms. Corbin said.

“I stopped counting how much it cost us when we hit $ 40,000 and that was about three years ago.”

Munchkin’s quest for an Australian residence saw the dog living in four foster homes in Singapore, including a penthouse – a far cry from his humble beginnings on the streets of Bali.

Her trip was hampered by health-related travel restrictions before the pandemic, after being bitten by a tick while in transit through Singapore.

Meanwhile, Ms Corbin and Mr Daynes moved to Bali so that they could travel to Singapore to visit Munchkin once a month.

Munchkin has consistently failed health tests to enter Australia but, after being found to be non-contagious, she finally received an official permit last week to enter the country.

With COVID-19 further complicating their quest, Ms Corbin said ordering a private jet to transport her now six-year-old dog to Australia was her only option.

“One of the biggest challenges we have is getting the dog out of New Zealand that she needs to go through Auckland, and flights from the North Island are not considered a green zone.” Ms. Corbin said.

“In addition, direct flights from the South Island of New Zealand to Queensland have been largely canceled and there is very little availability.”

She said that with COVID-19 quarantine restrictions between New Zealand’s North Island and Queensland, Mr Daynes would be in quarantine for Christmas and Munchkin would not be able to travel on a commercial flight until January. next year due to availability.

The irony is not lost on Ms. Corbin.

“I’ve been saying to my partner for two or three years, ‘Imagine if something happens, and we’ll eventually take her home by private jet,'” she said.

The next step is to select other passengers and manage the weight limits.

Ms Corbin said she was meeting 11 people from New Zealand via Zoom to determine who could arrange to be on the plane to Brisbane on short notice.

â€œIt will just be the one who can book with us because we would really like to organize the flight for next week,â€ she said.

“I’m not sure if we will be able to take seven more people due to weight restrictions, so we may only be able to accommodate five more people at this point.”

At this point, anyone on the flight from the South Island should not have to self-quarantine on arrival as directed by the Queensland government.

Ms Corbin eagerly awaits the arrival of an import certificate for Munchkin, which would bring her home without having to quarantine herself, six years and tens of thousands of dollars later.

“Wouldn’t this be the ultimate success story of this Bali street dog that we just found one day under our scooter?”

Local news straight to your inbox

ABC Sunshine Coast will deliver a summary of the week’s news, stories and photos every Wednesday. Sign up to stay connected.

In this issue | PNAS