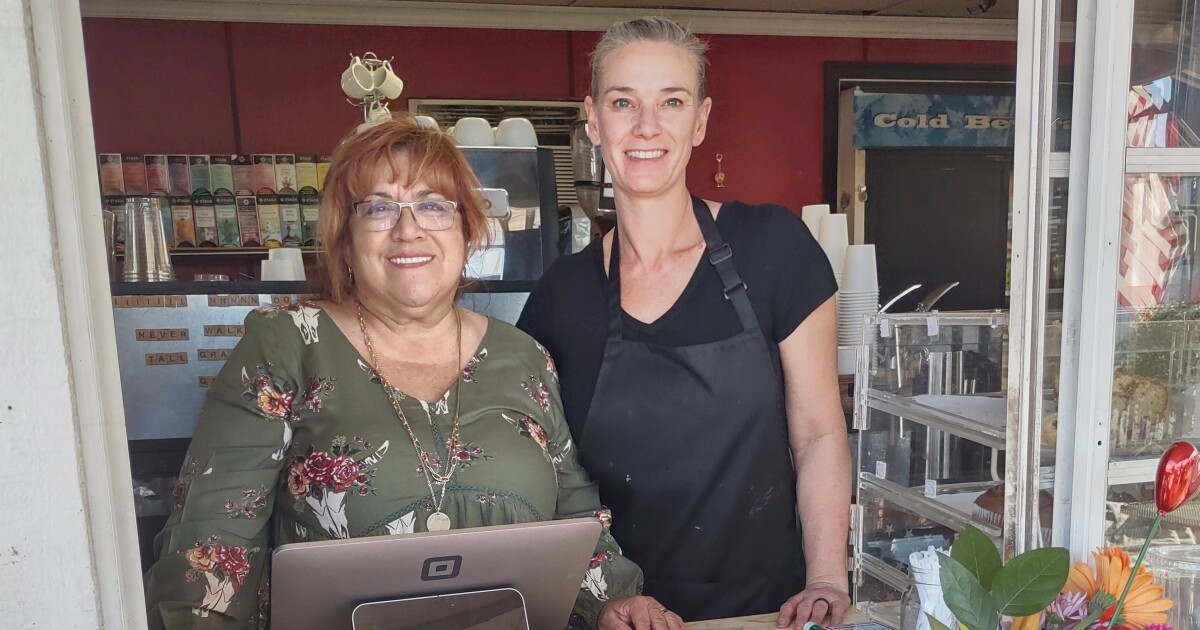 Ramona Business Roundup: Ramona gets a new cafe, while Packard gets a new owner, nom

Business is picking up at cafes around Ramona, including with a renovation underway at Starbucks at 13th and Main streets.

The Starbucks store closed in early February for a remodel that is expected to continue through March. After it reopens, customers will notice additional patio seating and a new cafe area, a spokesperson said.

Down the street at 680 Main Street, the familiar Packard’s Coffee Shop has begun its transition to Main Street Coffee.

Packard owner Nora Seidl said goodbye to the company she had owned since 2009 on January 14.

Seidl said it informed its loyal customers of the change.

“It hit me hard,” she said of the sale. “I didn’t think it was okay, but it was my life and my love for 12 years. I’m losing a love. It’s heartbreaking.

Shawna Reckling, the new owner, said she loves coffee and interacting with customers and always wanted to be a business owner in Ramona. While driving her daughter, Kimberly, to Salem University in West Virginia over the summer, Reckling said she stopped at several cafes along the way to get ideas for what to do. might look like his own shop.

When she returned home, she had a casual chat with Seidl about her dreams, and Seidl offered to sell her the shop on the spot.

“I asked Nora what worked and what didn’t, and she offered to sell me the store, so I bought it,” Reckling said.

Seidl said she wasn’t selling her business because she and her husband, Gene, weren’t successful, even during the tough pandemic years. They want to make family changes but also have health issues, including Seidl’s recent COVID diagnosis, they said.

Packard’s was opened in April 1993 by Rath Webster and James Hernandez. The duo named the cafe for a luxury Packard car they owned. Once Seidl took possession of it, she began selling Café Moto coffee produced by a San Diego coffee roaster. The premium coffee is organic and fair trade, she said.

“We are very precise in how we brew it and everything stays the same in that regard, because why waste a great product?” said Seidl, who will continue to run Seidl’s Party Rentals and plans to launch the Baked by Nora bakery business.

“Ramona should be excited about what’s happening at Main Street Coffee,” she said. “We have one of the best terraces in town. Come sit and watch the world go by.

Seidl has made changes to Packard over the years. She offered smoothies before they were popular and sandwiches until Jersey Mike’s opened a store in Ramona. The store’s current offering includes baked goods such as scones, breakfast sandwiches and Seidl’s specialty, pancakes.

Seidl held off the competition when Starbucks opened in town with the support of its “incredible customers.” When in-store restaurants closed due to pandemic-related space limitations, Seidl began sprucing up the patio with new plants, including bougainvillea and Japanese wisteria.

“You have to be diverse and be able to handle anything,” she said.

Seidl found a vintage Main Street Coffee sign on one of her shopping trips and showed it to the new owner, Reckling, who liked it so much she used the name.

Reckling, whose experience is in construction management over the past decade, said she was ready for the new challenge.

Among his plans are upgrading the patio with new seating and applying for a beer and wine license. A big goal is to create an inviting space that draws customers to the Thursday night Ramona American Graffiti Cruise parties on Main Street, she said.

Reckling also plans to collaborate with other companies. It already offers dog treats made by the Generation Day adult daycare center in Ramona.

“What sets us apart is our patio and location, and our pancakes and breakfast sandwiches,” she said.

Another cafe starting up in Ramona is Cedar Rose Cafe, which recently opened near Mamma Ramona’s restaurant at 1130 D St., Suite 10.

Cedar Rose Cafe is run by Gena Haidar, a special education teacher’s aide in the Poway Unified School District and a resident of Ramona since 2019.

Haidar entered teaching to have a flexible schedule that aligned with her ex-husband’s military obligations and allowed her to spend more time with her two daughters, now 11 and 14. But running a business has always been her dream and now she says she has the opportunity and the time to pursue it.

Haidar, 41, said she hoped to quit her current job by the summer. But she takes her time to make sure Cedar Rose Cafe has enough foot traffic to keep it running.

The shop is currently open 4:30-7:30pm Wednesday-Friday and 9am-noon on weekends, but hopes to expand that to 9am-2pm this summer and ideally 9am-6pm in weekdays and 9 a.m. at noon on weekends.

Haider’s long-term goal is to become a full-service Lebanese-Mediterranean cafe in a main street location.

She previously operated Pita Diva, a Mediterranean-inspired cafe in the former San Diego Country Estates Farmer’s Market. When space became available in its current location at the Villa Rosa Center, it moved Pita Diva into one of its storefronts. When she realized there was not enough space for a full-scale restaurant and faced competition from the new Sofie’s Pita in Ramona, she renamed the business Cedar Rose Cafe and focused on serving pre-packaged food and specialty beverages, teas and coffees.

Haidar said her own cuisine and flavors were inspired by her grandmother, Fatima Haidar, whom she visited in Lebanon growing up. Haidar said that during the 1980s she stayed with her grandmother for a long time in the midst of a civil war. While at his grandmother’s farm, reminiscent of Ramona, Haider often spent time cooking with her.

“My business side was inspired by my dad,” she said. “He was an entrepreneur and he traveled most of Europe and Africa and sold fabrics. He spoke seven languages ​​so he could talk to his customers.

Haidar said she was always expected to run her own business, but she was set back by marrying young, caring for children, and working in restaurants and hotels and in the food business. detail.

“Between COVID and my move to Ramona, my wheels started turning and I was thinking about what I wanted to do and that was it,” Haidar said. “Ramona is our new home and it has been such a positive experience. I have the opportunity to bring something new and inclusive.