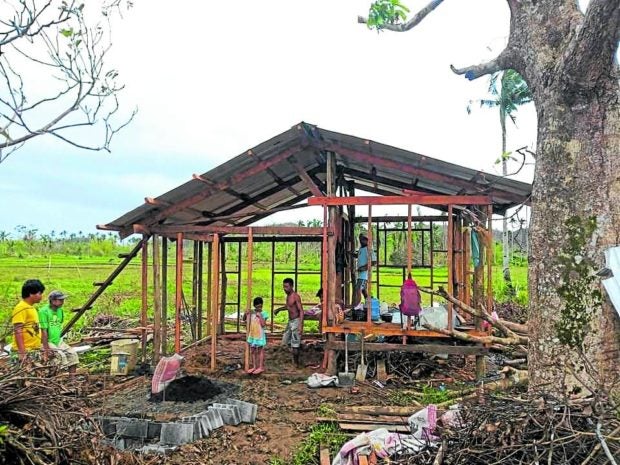 Jolly Gomez of JLG Prime Builders aims to build a 23 sq m house with a concrete base, coir wood from fallen trees and a sturdy GI roof.

Siargao has a special place in my heart because it is where I was able to reconnect recently with the magic of the Philippine islands worthy of a princess of the sea. It has an even deeper meaning because it is where my daughter Jordan decided to move out and make it his home. We had so many plans for Siargao and 2022, but suddenly, in less than 24 hours, Typhoon Odette swept across the island and shattered the lives and dreams of every person on the island.

It is really difficult to put together everything that happened in Siargao. After the storm left, it looked like a giant was crossing the island, trampling houses, picking up whole trees. People were left without homes; their provisions were wet with rain; all the water has become salty due to the intensity of the storm; cars were overturned; while trees and power lines blocked all roads. There was no electricity, communication, law enforcement, food and, for many, even hope.

Despite all the preparations of the islanders, they did not expect the typhoon to have such a huge impact. People were unsure whether or not to stay at home and fight the winds as they were also afraid of a similar storm surge in Leyte. Most of the houses were close to the sea.

A day after the typhoon, it was like everyone was in a daze. All the best efforts of the local government to help the people simply weren’t enough as the island slowly ran out of food, water and fuel. Many politicians came and gave relief but it was still difficult to reach the north of the island which was the most affected.

The mayor of a small town in Siargao mentioned that she fears the worst is yet to come when all aid stops and the island is left without coconuts, boats and tourism jobs.

JLG Prime Builders decided to focus on building small, decent shelters for the people in the northern part of Siargao.

While many foreign and local tourists have left the island, several have decided to stay and help the people who adopted them into the island community. Each has launched its own small relief operations, some working with local government, others around existing communities.

Community kitchens have been set up by Alexa Paroz and restaurant owners Mikael Gonzalez (Vedya), Guillermo (Alma) with long lines of residents receiving free meals, clean water and medicine. Nadine Luster installed a solar panel that allowed people to charge their phones. Everyone came out to help their neighbors despite the lack of electricity, supplies and basic comforts.

My friend Jolly Gomez (JLG Prime Builders) decided to focus on building decent little shelters for the people in the northern part of Siargao, which was the most damaged area after the typhoon.

In 1992, Betty White visited the real St. Olaf in Minnesota