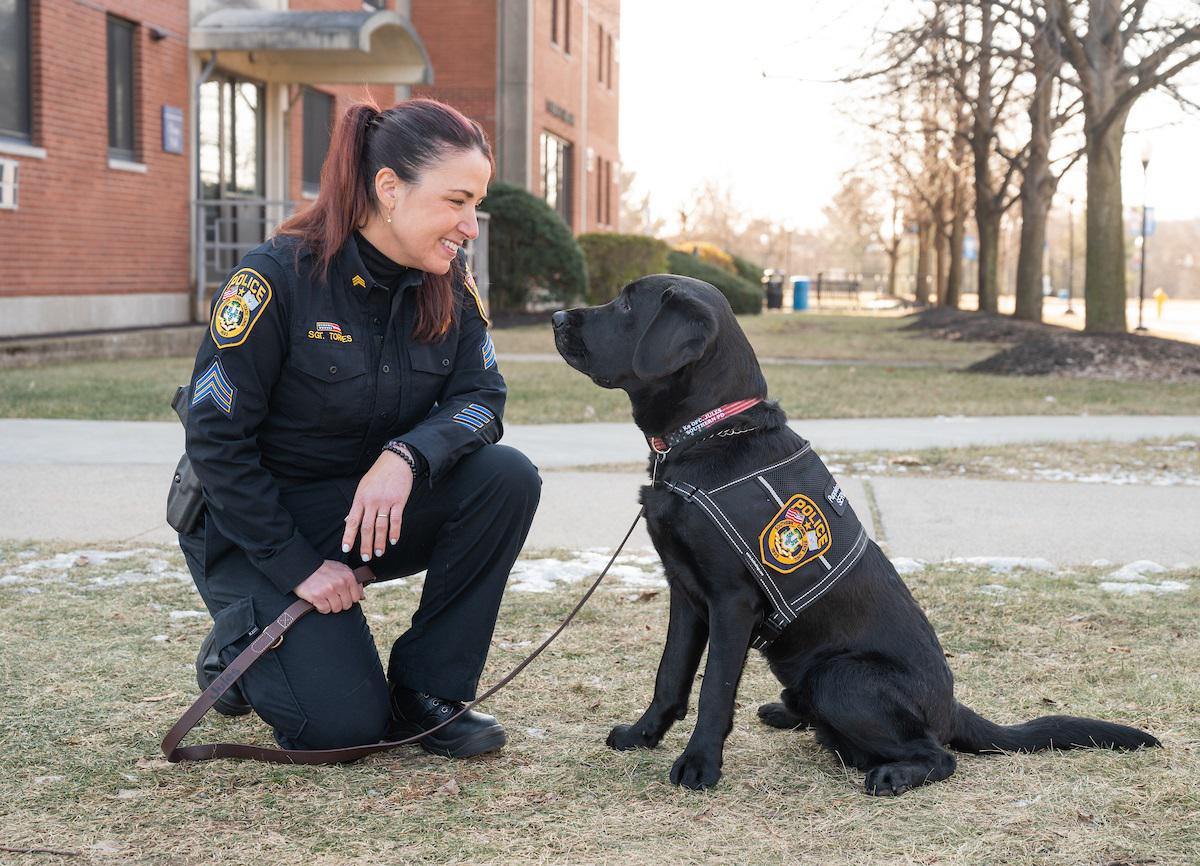 After he finishes eating, he picks up his empty metal bowl, brings it to Sgt. Cynthia Torres and drops it while wagging her tail.

Jules is a 70 pound Labrador retriever who is almost 2 years old. He started Monday at SCSU as a therapy dog ​​who roams the department to make officers feel better, roams campus with Torres as a friendly bridge for students, and may even one day comfort a survivor of a traumatic incident by listening as he makes a statement. .

sergeant. Torres said she brought Jules to the student center this week and at least 30 students and staff came to pet him.

“It’s great because it starts the conversation with us,” Torres said. “He takes the mood of the room well. He calms the room.

“A lot of times (we as police officers) aren’t seen as helping people, but that’s our goal,” Dooley said.

Torres, a 17-year veteran of the force, who was a police officer at Old Saybrook for about five years before, said she had always wanted a canine partner.

“I really wanted it more than anything in my entire career,” she said. “I love how dogs are bridging the gap in the community.”

Deputy Chief Constable Ken Rahn, who oversees SCSU’s canine program, was a 25-year veteran of the Milford Police Department before joining SCSU, and for eight of those years worked with K9 Samson, a German Shepherd. who has helped in many important cases.

Rahn said they got the first K9, Brody, during the pandemic and it was “very lucky.”

“Jules is just a great addition to the department,” Rahn said. “The real way to show the impact of the canine unit is to hang out with K9 Brody and K9 Jules and see how people react when they’re around. In many settings you can have people who have had negative encounters with police officers or people who have never interacted with a police officer.The presence of dogs removes some of these barriers and makes our officers more accessible and fosters more positive interactions.

Brody, a yellow Labrador, handled by Officer Paul Glynn, is primarily trained in bomb detection, but is also good at officer welfare work and does a lot of community, as Jules will. Jules, an official therapy dog, is trained to have a calm demeanor, while Brody has a higher demeanor because he is trained to detect bombs. Jules was known in his K9 class for his sensitivity, Torres said.

Both dogs were free on grants. While Brody was obtained through the State Police K9 program, Jules came from the group “Puppies Behind Bars”, a program where incarcerated individuals train puppies who will work with the police or people with disabilities.

The inmates rotate through the training – the guidelines are strict – then community volunteers, also carefully vetted, take the dogs for training in real-life settings.

When Torres had Jules, he came up with something like a “baby book” of the places he’d been, including New York where he negotiated everything that goes with it – the crowds, the noises, the smells of the carts at hot dogs.

“Training was an eye opener for me,” Torres said.

She said the sponsor is responsible for naming the dog and Torres was informed that Jules’ sponsor named him after French novelist Jules Verne because his granddaughter was starting to read the author’s works.

One of Jules’ most important jobs is “officer welfare”, department officials said.

Dooley said officer welfare is a growing grassroots initiative and goes hand in hand with a saying for policing: “Serve well, be well, from hire to retirement and beyond.”

“Anything we can do to take the stress away is a big plus,” Dooley said. It could be something as simple as Jules or Brody napping at an officer’s feet as they write up a report.

Torres said “Puppies Behind Bars” is an example of restorative justice being effective because people incarcerated have something to take care of and are held accountable.

“There’s an expectation and a responsibility – it’s a game-changer,” Torres said. She said those incarcerated were also “learning a skill set.”