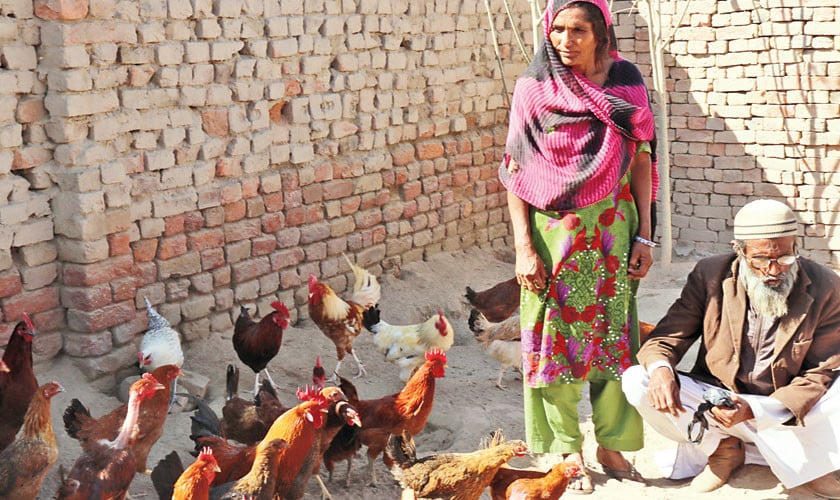 Shahida stands proudly in front of her presentation, rounding up her work with the European Union-funded Program for Improved Nutrition in Sindh (PINS). The women of the Sheikh Bhirkiyo Local Support Organization (LSO) are anything but ordinary. Even though they welcome the guests, they make sure to leave a good impression. Asking everyone to bring their ajraks and dupattas, they transformed General Secretary Shahida’s modest veranda into an explosion of color and embroidery, with people gazing around in silent admiration as they soak up everything. His pride is justified.

12 villages belonging to the LSO Sheikh Bhirkiyo had decided to work together for better nutrition. This represents 2,945 households, most of whom were living below the poverty line, with obvious implications for their health. Now they are united to overcome the challenges of malnutrition that impacted the future they wanted for their children.

PINS aims to improve the nutritional status of children under 5 and pregnant and lactating women in 10 districts of Sindh. The multi-component program supports the Government of Sindh’s multi-sector Accelerated Action Plan (AAP) for the reduction of malnutrition in Sindh. The program worked with LSO, Sheikh Bhirkiyo, to mobilize and train individuals. This will in turn improve food intake and reduce water-borne diseases through disaster-resilient infrastructure. It will also promote sustainable food production systems through the network of community institutions mentioned above.

Women are on the front line – after all, they are most at risk of malnutrition. Many struggle with pregnancy, plagued by micronutrient deficiencies and poor nutrition. Babies born are mostly underweight and struggle to gain weight as they grow, often stunted, which is irreversible beyond the age of two. As a result, they are destined for a life of struggles.

When PINS began working with LSO, Sheikh Bhirkiyo, women were paired with men to become Community Resource Persons (CRPs) to raise awareness of better food and hygiene behaviors. Nearly 3,000 women were sensitized on ways to achieve better nutrition. In the same vein, 12 of the 24 agricultural entrepreneurs are women, trained to transmit knowledge on the cultivation of organic and seasonal products. Together they have trained more than 1,200 households, with the program providing seeds to start their vegetable gardening journey.

“Before, we were mainly limited by our male family members, who didn’t allow us to participate as much. But with programs like PINS, we took matters into our own hands, using it as a platform to bring about change, which is proof that we too were agents of change. It allowed them to see our abilities in a different light, making them more willing to listen to us. Now it’s often us who give advice to our husbands”, explains one of the women, smiling and giving her husband a knowing look.

Shabana, a CRP, highlighted the state of water, sanitation and hygiene in the community. “1,803 households were encouraged to build latrines, mainly through sensitization sessions and visits for additional advice. This enabled the community to achieve ODF (open defecation free) status with the 12 village organizations certified by the district ODF committees.

There was mutual agreement when the women were asked if they felt any impact of PINS in their lives. The answers came in many forms, ranging from awareness to the possibility of becoming a business owner. “I always thought that my needs would always come second. Even when we were pregnant, when we should be getting extra care and attention, we would still be eating leftover food. Now that changed when I started attending the sessions. During my last pregnancy, I was more aware of all the things I needed to do, including putting my health first. To make things easier, I received a grant from 30,000 PKR to buy two goats,” says Soomri.

Women like Soomri now own goats, which is often the first asset they have to their name. This makes them more likely to drink their milk, which they otherwise wouldn’t. This milk is often exchanged for fruit or meat, which means a more balanced diet. There is also behavioral change aimed at helping them recover when they become new mothers.

Azeema Khatoon, one of the villagers, spoke about the various changes that have taken place in the lives of women and their children. “Women were often forced to start work on the second day after giving birth. Now mothers-in-law understand the importance of good rest in the postpartum period, when a woman’s body begins to heal, thanks to the community outreach session”.

“We also learned the importance of colostrum, often referred to as first breast milk, which we were told to waste earlier. It has proven its benefits in boosting the immunity of the child,” she adds.

When asked what remedy they had before for stunting, Azeema replied, “We used to weigh a stunted child with cow dung. After making cakes with this cow dung, we let it dry in the sun. People believed that as the dung cake dries up, the child will be saved from stunting. Another way was to bathe a child while keeping a puppy below him. They believed that after this totka the puppy will die and the child will survive. Another way was to leave a child in a cemetery and then another person would bring it. Some people would resort to magical healing, but the stunted children would eventually die, leaving their families devastated.

The community also agrees that PINS has been a blessing, especially when the coronavirus pandemic hit. “We were already prepared, eat better and take care of our hygiene. We started making our own cloth face masks and washing our hands more with soap,” enthuses Shabana. Due to their involvement in vaccination programs before, it hasn’t been too difficult to convince people to get vaccinated to protect against COVID-19. Once the vaccine was available at a nearby hospital, the community turned out in droves to get vaccinated, encouraging others who were still hesitant about their experience. “Now looking back, it sounds like what we do with our community outreach sessions. It’s amazing to see the impact in cases like this! it highlights.

For Haseena, PINS also meant becoming an entrepreneur, where she partnered with her nephew to start selling fodder and other livestock feeds in the area. Their top-selling product contains jaggery which is meant to boost milk production. She earns between 6,000 and 7,000 PKR per month. “I used to do an awful job, but now I’m earning decently with this new opportunity,” Haseena shares.

Shabana Khatoon, wife of Amir Bux, is another agricultural entrepreneur. She had an impressive record at her agricultural field school, which helped her win the grant. In partnership with her husband, she now uses this space to grow broccoli and purple cabbage which are in high demand in metropolises like Karachi, 3 hours away. They earn up to 500 PKR per kg. “We take the photos of the products and send them to buyers or spread the word at community meetings,” says Khatoon.

The money they earn is reinvested in their poultry business, for which she received 50,000 PKR and invested 10,000 PKR on her own. She now has 75 birds and sells eggs in the community. Together with her husband, she has also bought an incubator which they use to raise chicks to enlarge their brood and sell them in the market. Started three months ago, the couple now earn between 500 and 600 PKR per day. “Before, I sold vegetables or fried fish or I did odd jobs. Now, working on our business, our monthly income is between 15,000 and 16,000 PKR,” says Amir Bux.

As part of PINS’s collaboration with the Sindh Forest Department, efforts have also been made by communities for more greenery. They aim to plant 500,000 trees as part of the Ten Billion Tree Tsunami program in the ten districts in which it works. Within Sheikh Bhirkiyo itself, up to 600 moringas and 400 fruit trees including guava, falsa, plum and jujube have been planted. “Being surrounded by greenery and having fruit too is wonderful!” says Kanwal, a community member who has been active in PINS.

All of these initiatives are clearly bringing about change. Most importantly, it fostered an unparalleled community spirit to collectively work towards a healthier future. It is wonderful to witness this transformation, which is as beautiful as the myriad colors of ajrak surrounding these women who are nothing less than changemakers. The next generation is lucky to have role models who have sacrificed so much to get here. But working on programs like PINS has made them smarter, stronger and more determined to build the future they know they deserve.

The author is the publisher of the supplements. She can be contacted at: [email protected]