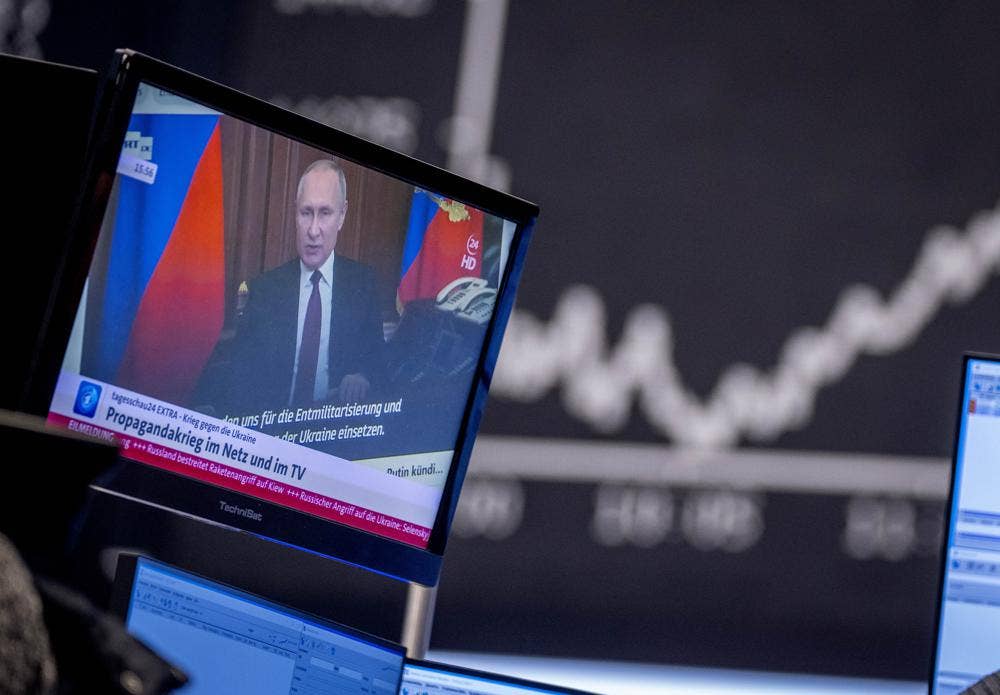 War via TikTok: the new Russian tool for propaganda machine

Here are your FOX Business headlines.

The Russian TikTok video has it all: a cat, puppies and a pulsating background beat. It’s cute, watchable, and hardly looks like state propaganda.

The effort represents an emerging part of Russia’s war arsenal with opinion-forming through orchestrated disinformation by fighting alongside real troops and weapons.

In the video of the cat, a husky puppy identified with a digitally inserted American flag sweeps the tail of a tabby cat identified with a Russian flag. The cat responds with a fierce blow that sends the unfortunate dog rushing forward. The clip, which has been viewed 775,000 times in two weeks, is the work of an account named Funrussianprezident which has 310,000 subscribers. Almost all of his videos feature pro-Russian content.

“It could just be a patriotic Russian fighting the good fight as he sees it, or it could easily be something directly affiliated with the state,” said disinformation researcher Nina Jankowicz. and Eastern Europe expert at the Wilson Center in Washington. “Russia has perfected these tactics.”

Now they put them into play.

Analysts from several different research organizations contacted by The Associated Press said they were seeing a surge in online activity by Russian state-affiliated groups. This is in line with Russia’s strategy of using social media and state media to galvanize domestic support while seeking to destabilize the Western alliance.

On the internet, there has been a rapid increase in suspicious accounts spreading anti-Ukrainian content, according to a report by Cyabra, an Israeli tech company that works to detect misinformation.

Cyabra analysts followed thousands of Facebook and Twitter accounts that had recently posted about Ukraine. Researchers found a sudden and dramatic increase in anti-Ukrainian content in the days immediately preceding the invasion. On Valentine’s Day, for example, the number of anti-Ukrainian posts created by the sample Twitter accounts jumped 11,000% from a few days earlier. Analysts believe that a significant portion of the accounts are inauthentic and controlled by groups linked to the Russian government.

“When you see an 11,000% increase, you know something is happening,” said Cyabra CEO Dan Brahmy. “No one can figure out who’s doing this behind the scenes. We can only guess.”

In this photo illustration, the TikTok app is displayed on an Apple iPhone. (Drew Angerer/Getty Images/Getty Images)

Work has been underway for some time.

Researchers from the Atlantic Council’s Digital Forensic Research Lab analyzed 3,000 articles from 10 Russian state-owned news outlets and noticed a sharp increase in unsubstantiated claims that Ukraine was about to strike separatist groups. Overall, Russian media allegations of Ukrainian aggression jumped 50% in January, according to the research.

US IS MOVING – SOME SAY TOO SLOWLY – TO RESPOND TO TIKTOK, SECURITY RISK

For Russians and pro-Russian separatists in Ukraine, the message is that Russia is trying to defend its own people against Western-fueled aggression and persecution in Ukraine. Similar tactics were used, including by Nazi Germany when it invaded Czechoslovakia under the guise of protecting ethnic Germans living there, Ludes noted.

Russia also uses misinformation to confuse and demoralize its opponents. For example, the Kremlin said it resumed fighting on Saturday after a break for possible talks with Ukraine. But Associated Press reporters in various parts of Ukraine have found that the Russian offensive has never stopped.

Meanwhile, the United States has information indicating that Russia is publishing false reports of widespread Ukrainian troop surrenders and claims that Moscow plans to “threaten to kill the family members of Ukrainian soldiers if they do not don’t give back,” according to State Department spokesman Ned Price.

Russia also used cyberattacks in its invasion of Ukraine, and while they pose a serious threat, online propaganda can cause even more lasting damage if successful, says retired Lt. Gen. Michael Nagata , former Director of Strategic Operational Planning at the US National Counterterrorism Center.

“Far more dangerous is Russia’s ability to influence what people everywhere believe,” Nagata said. “To make them believe things that are useful to Russian strategic interests… If you are able to change what an entire population believes, you may not have anything to attack.”

In the West, Russia seeks to sow division and reduce the chances of a unified international response. It does this in part through a stable of state-controlled media outlets such as Sputnik and RT, which publish in English, Spanish and several other languages.

“The invasion is over,” read a headline in RT last week, just days before Russian troops entered eastern Ukraine. “Tucker Carlson criticizes Biden for focusing on Putin, Ukraine instead of US domestic issues,” reads another in Sputnik News, reflecting a common Russian practice: quoting government critics in the US (like the Fox News host Carlson) to suggest that America’s leaders are out of touch.

The European Union raised concerns about RT on Wednesday by placing RT’s editor on a sanctions list against Russian officials. The EU called RT leader Margarita Simonyan a “central figure in government propaganda”.

On Friday, Facebook announced it would ban RT from running ads on its site and said it would expand its use of labels to identify state-run media outlets.

GET FOX BUSINESS ON THE ROAD BY CLICKING HERE

Ludes said he was pleased to see the United States and its allies forcefully push back against Russian disinformation and even seek to pre-empt it by publicly disclosing Russia’s plans.

“The Biden administration has shown some creativity in using intelligence to respond,” he said. “We haven’t seen this from the West since the days of the Cold War.”