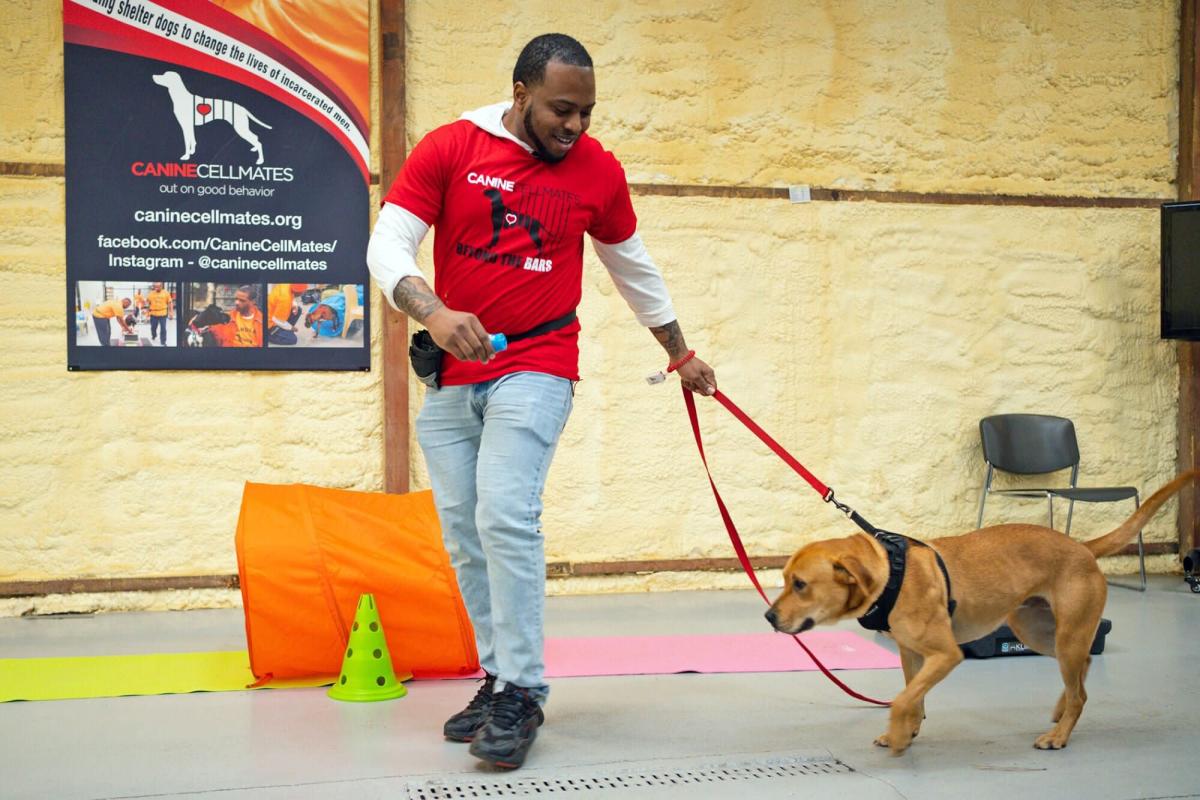 If Susan Jacobs-Meadow only wanted to save dogs, she admits she wouldn’t be in her current, more complicated job.

She certainly loves dogs and has helped over 150 of them find new homes, but that’s after many of them lived in one of the last places you’d expect to see rescued puppies. : Fulton County Jail in Atlanta.

This is where Canine Cellmates has matched incarcerated men with rescue dogs since 2013. Inside, the men trained and cared for the dogs until the puppies were ready for adoption. The training obviously helps the dogs, but the program – which has trained 400 guys and expanded outside of prison – also aims to help men rediscover themselves and prevent reoffending.

Classroom work and instruction can help humans get in touch with their emotions and learn, but it’s not as effective without dogs.

“I happen to believe that dogs have a gift that other animals don’t have, and that gift is having the ability to look inside a human being and find what’s there. is good, because it is. It always is,” Jacobs-Meadow, executive director of Canine Cellmates, tells Daily Paws. “But then they have the ability to help that person see that in themselves.”

Jacobs-Meadow and Kimberly Collica-Cox, a criminal justice professor and director of the Parenting, Prison and Pups Program in New York, have seen the men and women in their programs open up because of the dogs. That boatload of anecdotal evidence turned into Collica-Cox research, showing that women in its dog-assisted therapy program reported feeling higher self-esteem and less stress as they learned valuable parenting skills.

“[The dogs are] always happy to see you, and I think it makes people feel really good about themselves,” Collica-Cox said.

In Atlanta, the Canine Cellmates in-prison program lasts 10 weeks. The dogs, usually from Fulton County Animal Services, undergo temperament tests to see if they could live in jail with the men. These dogs need to be resilient with therapeutic dog behavior, and Jacobs-Meadow estimates that only 10% of dogs can do this.

In the prison, the dogs join the men in a dormitory-style living space, usually six dogs for every 13 men. The men are typically on their third to fifth offense, between ages 30 and 45, Jacobs-Meadow says. Because prison populations are more transient — men attend court hearings, are released, or transferred to other institutions — the guys work as a team. They train the dogs with basic cues as the dogs tackle the walls of self-preservation the men have built while incarcerated.

“Dogs have the ability to create cracks in those walls. They help these men find that place of humanity within them that they’ve taken away,” Jacobs-Meadow said.

She says she’s seen men transform from non-reactive or opposite and warp into “warmer, softer” versions of themselves because of the dogs. The shelter dogs are so helpful that she doubts the program’s instruction and curriculum would be as effective without them.

At the end of the 10 weeks, Canine Cellmates hold a graduation ceremony where the men receive certificates and the dogs go home with their adopters.

“…for many of these men, this experience is the first time they’ve stood in front of a group…and been recognized for doing something positive.”

“Our graduations are always very profound experiences for everyone who attends,” says Jacobs-Meadow. “Almost everyone who comes to our graduations cries, including the men. Because for many of these men, this experience is the first time they have stood in front of a group of people and been recognized for having do something positive.”

RELATED: We Like It: Seniors Get Extra Support to Adopt Rescue Animals

“It changes the lives of dogs and men”

Hoping to replicate that success at the facility, Canine Cellmates hosted its first Beyond the Bars class last year. This year-long program still includes dog training, but these men also do class work designed to help them thrive and stay in their communities. In the end, the men’s charges are dismissed. And the dogs are ready for adoption into the wider community.

For some men, Beyond the Bars is a diversion program, an alternative to incarceration. Some participants have not yet been charged while others may have violated their probation. (Jacobs-Meadows thanks the Fulton County District Attorney’s Office for working with Canine Cellmates on this outdoor program.)

“The things we learn are priceless, which means you can take them with you for the rest of your life,” Iman, a 25-year-old Beyond the Bars student, told Daily Paws. “…It changes the lives of dogs and men.”

Iman worked with a mix of pointer and pit bull named Tundra. She’s a little overactive, but once he found ways to help her calm down, she quickly picked up on her positive reinforcement training. This darling hasn’t been adopted yet, so Iman is quick to approve her as a candidate for someone’s family.

“We really have a connection, me and her,” he says. “I talk to him like a person.”

He says dog training made him feel like getting to know someone rather than working. This may be the reason why, after hearing about the program, some people told him that they would like to participate in their spare time.

He also appreciated the curriculum of the program, especially the instruction in emotional competence. This is how he learned to meditate. He called the instruction “life changing”, saying it taught him how to regulate his emotions.

He and the other men also received instruction in parenting, job hunting, computer literacy and conflict resolution. After Phase 1, men will complete three more 90-day phases before completing the program. In Phase 2, they will visit Canine Cellmates once a week for classes and to work with the dogs.

RELATED: From Spain to New York, more and more governments are recognizing pets as living beings, not property

The men told Jacobs-Meadow “several times” that his program had prevented them from re-entering the criminal justice system. A man, who took the program about eight years ago, called her a few years ago and asked her if she had seen the information about a major drug bust. His cousin had been arrested and he thanked Canine Cellmates for keeping him out of this situation.

The Collica-Cox Parenting, Prison, and Pups Program operates in the Westchester County Department of Correction, where Hudson Valley Paws for a Cause therapy dogs help women open up while they go through their parenting program .

Dogs sometimes act as icebreakers and even comfort women when they talk about something upsetting, Collica-Cox says. Dogs provide comfort in a prison, and it’s hard to find.

“It made me feel like I wasn’t [incarcerated]. When I saw them, they took me from here,” one woman, imprisoned at the now closed Metropolitan Correctional Center, told Collica-Cox and George J. Day in their study of the program.

Dogs also help human participants open up to the learning process earlier. By comparison, when Collica-Cox launched the program without the dogs, it took longer for the women — sometimes not until the 10th class — to begin freely sharing their experiences. With dogs, women leaked personal information first or second class.

“From there, you can build on deeper conversations, deeper issues,” Collica-Cox says.

Jacobs-Meadow and Collica-Cox will applaud their dogs’ ability to break the ice with their students, but it’s the men and women who work hard to learn new skills and train their dogs so they can join the world.

“Come for the dogs but stay for the men,” says Jacobs-Meadow.

One of these men, Iman, loved the dog training aspect of Beyond the Bars so much that he is working to become a certified dog trainer. He hadn’t planned this before the program, but now he’s working towards his 420 hours of practice, probably with the help of his American Staffordshire terrier Woki.

“When I came here, I got a whole new love and respect for dogs when I started learning how to communicate with them,” he says, “and I learned what they were trying to do. to tell me.”